Goldilocks, George Carlin, and the Middle of the Road 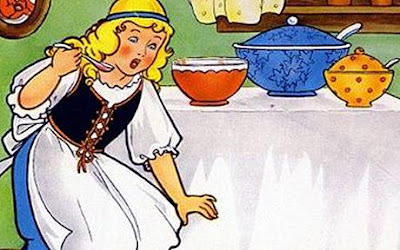 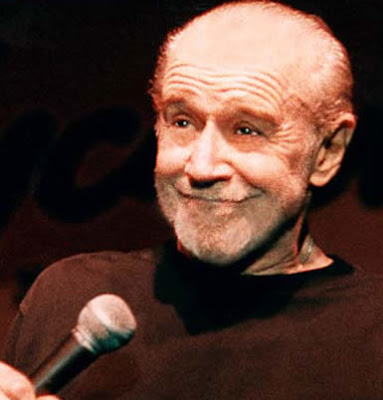 "This one is just right!"
~ Goldilocks
“Have you ever noticed that anybody driving slower than you is an idiot, and anyone going faster than you is a maniac?”
~ George Carlin

In some ways, the liturgy is like a baseball glove or a favorite pair of jeans.  Pastors and laymen become comfortable with a certain (for lack of better terminology) "height."  That is to say, a certain level of ceremony during worship.

There are indeed very "low church" Lutheran congregations and pastors - those who eschew such vestments as chasuble and alb in favor of cassock and surplice, or in some cases, a choir gown over a shirt and tie.  They prefer to either speak the liturgy, or at least have the pastor speak his parts of the liturgical dialogue while the people sing their responses.  Genuflecting and elevating at the altar are out of the question.  Some may frown upon the sign of the cross and the use of a chalice.  Some such congregations de-emphasize the sacramental element of the liturgy so as to celebrate the Eucharist with less frequency than the "every Sunday and every feast day" description in the Augsburg Confession.

I do think the number of such congregations has grown smaller in recent years.

If a new pastor were to come along in one of them and sing his parts of the service, cross himself, put a chalice on the altar, and start preaching about having communion every Sunday - some people would (naturally) get uncomfortable.  There may even be suspicions and whispered accusations of "Romanism."  For in the mind of someone used to such a low level of ceremony, anything "higher" is somehow "too catholic."

There are also very "high church" Lutheran congregations and pastors - those who make full use the the traditional vestments, such as chasubles, and in such services as ordinations, perhaps even a cope.  Some LCMS district presidents carry bishop's crosiers, and one even wears a miter on occasion.

What was once considered "high church" has become normalized.  It is more common nowadays for pastors to chant, genuflect, elevate, and it is hardly uncommon for pastors and laymen to cross themselves.  Incense is not common, but nor is it unheard of in many of our churches.  Most congregations these days offer both the chalice and some form of individual cup, and celebrate the Lord's Supper every Sunday.

And while not all of these practices are the norm in all places, they are certainly not uncommon - especially chanting, crossing, and chasubles - which are all now quite mainstream.  A few decades ago, these might have been considered "extreme" or "high church" or "too catholic" by many.

There has indeed been a movement back toward our Lutheran roots - including our ceremonies - much of which were lost over the last hundred years as German immigrants adopted the language and customs of their non-Lutheran American neighbors.  The blessings of ceremony - as articulated in our Book of Concord - have been rediscovered and re-implemented in churches across the country.  I can't cite any studies, but I don't know that I would get much argument if I were to assert that the average "height" of the typical LCMS congregation - averaged overall - has increased consistently over the last few decades.  And this trend has continued even in the time-frame since the death (nearly four decades ago) of Dr. Herman Sasse, who is often cited for his distrust of the Liturgical Movement.  What he viewed askance in his day has actually become rather ordinary among mainstream LCMS Lutherans.  His warning against widespread defections to Rome have proven (by hindsight) to be unfounded.

For every Lutheran pastor who becomes a Roman Catholic, there are probably a hundred who now wear a chasuble with no thought of leaving our confession.  What should concern us far more is the large numbers of pastors who leave the ministry burned out, those abused by congregations and/or district presidents, as well as those who linger in CRM status year after year - not to mention candidates who may never get a call.  These are much more realistic (and common) problems facing us than the occasional defection of a pastor to Rome.

Can you just imagine what Dr. Sasse would have thought about a mitered bishop preaching at the installation of a synodical president in the chapel of one of our seminaries?

But the Carlin Observation is alive and well among those who warn against "extremism" in matters of ceremony and liturgy.  Playing the role of a liturgical Goldilocks ("not too high... not too low... just right!"), some will offer opposite-and-equal criticisms against both non-liturgical "praise" services (Carlin's "idiots") and the "Gottesdienst Crowd" (Carlin's "maniacs") - as though these are two equally un-Lutheran choices.  Some may argue for a certain level of ceremony, and not anything more - as if there is some kind of Golden Mean, a "just right" for everyone.  It calls to mind a joke by Dr. Norman Nagel (as recounted by one of his former students, now a professor) who advised pastors (with tongue in cheek) to wear their stoles a little crooked so as not to be thought of as "high church."

In many areas of life, moderation is certainly wise: beer, fried chicken, cigars, etc.  But sometimes moderation is not such a good thing: teaching correct doctrine, being true to one's vows (ordination, wedding, promise to tell the truth in court, etc.), preaching the law in its severity, preaching the gospel in its sweetness, being well-groomed and hygienic, being deferential to ladies and to children, politeness, genuineness, a commitment to excellence in one's various vocations, taking pains to communicate through ceremony what we confess, etc.

I don't think anyone would want to go the Goldilocks route in such matters, seeing a Happy Medium between the "extremes" of, say "Gentleman" and "Philistine."  What would such moderation look like?  A guy who only belches and wipes his nose on his sleeve occasionally at the dinner table?

Moreover, the argument that "smells and bells" and "happy clappy" are two sides of the same coin is a false analogy, and nowhere near a valid approach to liturgy.  It is a convenient way to appeal to the center, to the majority that are somewhere in the middle, to those who (for whatever reason) are not interested in pursuing a richer ceremonial and liturgical life in the parish as has been the trend among our synod as a whole for decades.  Liturgy is normative in our Lutheran confessions.  Going without the liturgy is un-Lutheran and antithetical to our confession.  On the other hand, being "high church" is consistent within our tradition as articulated in the Book of Concord.  To lump the two together in a box and label them both un-Lutheran is just plain wrong.

Higher is not necessarily better.  But we have been on a trajectory for decades to elevate the ceremonial in our churches - for these ceremonies "teach the people" and confess (to ourselves and to the outside world) what we believe is really happening on our altars.  Reverence can be shown (and indeed ought to be shown) even when Masses are said in muddy ditches with soldiers, even when said on food trays in a hospital, even when such niceties as altar cloths and candles and chasubles and an organ are not present.  And even when parochial considerations make it premature or ill-advised for a pastor to introduce something like a chasuble, he can (and should) still carry himself with dignity, not flippantly, not casually, not in some kind of affected slovenliness so as to avoid the accusation of being too "high church" in some Quixotic Goldilocks extremism of moderation.

Indeed, there are pitfalls of extreme moderation.  There are faithful people who are forced to commune without a chalice because of the pastor's timidity.  There are faithful people who go week in and week out without every Sunday communion because the pastor is trying to avoid extremes.  There are faithful people who continue to believe that the sign of the cross and the crucifix are things that are for other Christians, not for Lutherans - and thus do not benefit from such expressions of the incarnational and cruciform faith as an aid to prayer and devotional life.  Being a moderate extremist is also a fast path to Phariseeism, as one gets to be the liturgical Goldilocks, a self-appointed policeman who gets to chide both "high" and "low" alike - in fact, anyone who doesn't do it just the way he does, anyone who dares to deviate from his own personal norm.

It is George Carlin's observation about driving speed applied to liturgical ceremony.

I don't claim to speak for anyone else at Gottesdienst, but our motto is most certainly not "higher is better" and "a thurible in every chancel."

What is important is faith in Christ the Crucified One who died for the forgiveness of sins and to give us eternal life - working through the means of preaching and sacraments.  We do believe that as Lutherans, we ought not not practice moderation in communicating God's grace in Word and sacrament, in what we say and in what we do - including how we do it.  Often what we say can be undone (or enhanced) by how we say it.  And so, we emphasize ceremonies as tools of communication - even as ceremonies were nearly all retained by our Lutheran forefathers.  We are pleased to see ceremonies returning to our liturgical life in North American Lutheranism.  But if you are going to make use of traditional ceremonies as teachers and communicators of God's grace and Christ's presence (and we do think you should - exercising proper pastoral care and wisdom, of course), then everyone - pastors and laymen - ought to know how to do them properly, what the etiquette is, how to communicate the gospel in a nonverbal way - both within the church and to those outside the church - so that we might confess with clarity.  Anyone who would mock a careful emphasis on propriety and "taking pains" in matters of worship, even in matters that might appear to be petty details, might want to restudy Exodus, Leviticus, and Numbers.  If we are serious about the real presence of Christ on our altars, we ought to be serious about our conduct in that real presence.

Ceremonies are not about looking pretty, but rather about communicating well and with excellence.  Ultimately, it's all about charity, humility, and love.  A man who loves his wife will "take pains" in the way he acts around her, treats her, and speaks to her.  Christ took great pains for us on the cross.  And we "take pains" to confess this truth with clarity and in love.

In the final analysis, it is all about God's grace.

And when it comes to God's grace, I think "moderation" falls into the category of what you often find in the middle of the road, the ultimate symbol of the "extreme moderate"... 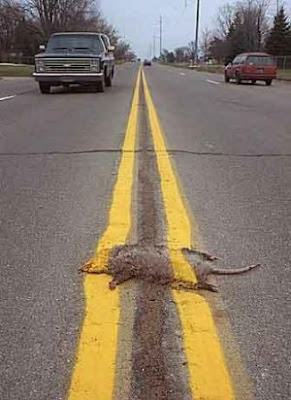