Christmas issue is soon to go to the printers

The Christmas issue of Gottesdienst should be printed and in the mail within a few weeks. With a quick look at  the Contents page you can see what's in there. Now is the time to subscribe, or renew.

Now is also the time to consider getting a gift for a friend (be sure to scroll down to the gift portion of the form): say, for Christmas.

Now is also the time to consider making a donation, In fact, remembering that we do depend on gifts for a large part of our support, we have just launched a fund drive, and we are pleased to announce that for a donation of $50 or more, we’d like to send you a free gift, your choice of either of two books. The first option is Every Day Will I Bless Thee: Meditations for the Daily Office.  This book, published in 1992, provides a Bible reading and a meditation for every day of the year plus Saints’ Days, with the year’s collects and an index (hardcover, 520 pp.). Or you may prefer The New Testament in His Blood: A Study of the Holy Liturgy, published in 2010, which delves into the significance and meaning of our New Testament liturgical worship (paperback, 117 pp). Just indicate your preference in the comments box.
Posted by Fr BFE at 5:15 PM No comments: 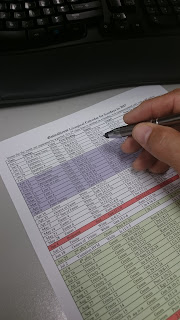 The new Gottesdienst sanctoral calendar for every Sunday of 2017 is out. It actually begins with Reformation 2016. This will be an insert in the next issue, but it is also available in living color at our web site.

The Word Remains: A Review 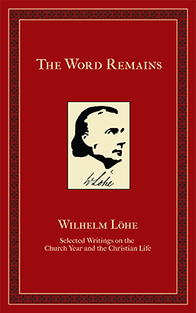 Emmanuel Press has released another boon to pastors and laity alike in The Word Remains: Wilhelm Löhe: Selected Writings on the Church Year and the Christian Life.

In spite of this book's lengthy title, it is not an intimidating tome.  And this is one of the book's strengths.  It's a paperback pocket book, 140 pages.  This is not an intimidating theological treatise, but rather a delightfully relevant and portable devotional introduction to the works of the Rev. Wilhelm Löhe (1808-1872), an immensely important Lutheran theologian who was first and foremost a pastor: a preacher, and giver of soul-care in a rural German village parish (Neuendettelsau), where he served for 37 years.

Pastor Löhe displayed a blessed combination of theological brilliance and intensity and a pastor's heart and tireless devotion to the Gospel - both in his village and around the world.

The book begins with a preface to the English edition, followed by a helpful essay by Manfred Seitz entitled "Reading Wilhelm Löhe: A Portal."  This is followed by the bulk of the work: a devotional of excerpts of Löhe's thoughts arranged first by the Church Year, and second by general topics, followed by another topical section of very brief maxims.  The book concludes with helpful background information about Pastor Löhe: a concise biography by Hans Kressel, a chronology, a list of sources, and finishing with an essay "Löhe as Pastoral Theologian: the Discipline of a Shepherd" by John Pless.

The Word Remains is the kind of book that can be read quickly from cover to cover in one sitting, or opened to any random page and enjoyed.  But in fact, the book is best sipped like a fine glass of wine, taken in unhurriedly, and meditated upon.  This book is neither stuffy nor frivolous - but rather profound and yet accessible to the thinking Christian of any vocation.

Manfred Seitz describes the book as a "portal" to the writings of Wilhelm Löhe.  I prefer to think of it as a sample plate, a tapas repast of high delight that is neither filling nor unsatisfying.  Like an appetizer, it leaves the palate eager for more.  Seitz recommends reading the book in a "contemplative" way, "lingering" over the text in the way of the ancients (p. 3).  He elaborates on this kind of reading by appealing to St. Benedict, making a case for renewing this kind of meditation among modern Christians.  Blessed Wilhelm, who saw modern Lutherans in continuity with the ancient church, would most certainly approve.

My impression of Wilhelm Löhe is that he was a man ahead of his time.  He was fiercely devoted to the sacrament of the altar, private confession, the Book of Concord, and the richness of the church's traditional liturgy.  He understood the centrality of mission, and though he never set foot in America, his influence upon American Lutheranism is extraordinary.  He also suffered for the sake of his confession, opposing rationalism and enforcing church discipline, and for his steadfastness was rewarded by being temporarily suspended from office.  He also established and oversaw a deaconess institution, to which the modern LCMS deaconess program owes a debt and bears some similarity.  Löhe saw theology not as a theoretical academic subject, but rather as the living, breathing Gospel of Jesus Christ lived out in the community of flesh-and-blood people.

The Word Remains is inspiring and encouraging, bringing the writings of Wilhelm Löhe to life in our day and age, in our likewise controverted context, in which confessional Lutheranism is, in the words of another confessor, Herman Sasse, a "lonely way."  And yet it is a path of joy, concerning which Löhe writes, "should awaken from suffering, and joy should bloom and flourish despite suffering" (p. 90).

Without sharing too much, I offer a shining excerpt in a beautiful English rendering of Löhe's lyrical reflection on the Lord's glorious resurrection on the day of Easter:


"No other act done by God for the world is as praised and commended as the resurrection of our Lord.  The earth quaked, angels came down, saintly bodies arose, guards fled.  Pharisees and scribes could not conceal what happened with a lie; no veil of darkness could have hidden the splendor of Easter morning.  Where is your denial, O world?  He is risen!" (p. 22).

The Word Remains is a little treasure, a breviary, a portal, an introduction to Wilhelm Löhe's life and work, and an invitation, in the words of Manfred Seitz, "to linger, immerse, yourself in these words, and read with a listening heart" (p. 5).
Posted by Rev. Larry Beane at 10:18 PM 3 comments: