Materials from the 2014 St. Michael's Liturgical Conference at Zion Evangelical Lutheran Church of Detroit are being posted at Zion's website.  A number of our Gottesdienst editors were involved in the conference in a variety of ways: Fr. Mark Braden hosted and presided, Fr. David Petersen preached for the St. Michaelmas, Fr. Burnell Eckardt presented a sectional paper, the undersigned presented a paper on the pastoral care of catechumens and communicants, and all of the above participated in a panel discussion on the topic of Confirmation and First Communion.  Other presenters included Fr. Joel Baseley of Dearborn, Michigan, and Fr. Daniel Reuning of Fort Wayne, Indiana.
Posted by Rev. Rick Stuckwisch at 9:44 PM 1 comment:

Who Cut the Cheese?

This is a video released by Pastor Mark Junkans (LCMS) who serves a call at Lutheran Inter-City Coalition in Houston, Texas (Texas District).

Pr. Junkans uses the word "communion" - but it sounds more like a house party to me.  Although I would prefer meat hors d'oeuvres or cocktail weenies, since I don't eat bread (Holy Communion excepted) - I would never attempt to bind consciences regarding the proper finger foods to go with Lutheran beverages.  To each his own!  Though (and I realize I am on shaky 8th Commandment and Matthew 18 ground here), I do think some research is in order to determine the propriety of omitting cheese in such contexts.  Is this an adiaphoron?  That question is certainly above my pay grade.

Passing around a bottle sounds like a great time (not that Lutheran pastors know anything about that...) - and is certainly of the order of First Article gifts.  But I don't know if Pr. Junkans is trying to say this communion is a simply bunch of parishioners quaffing at a cocktail party, or rather if this is supposed to be the Holy Communion, the Sacrament of the Altar, the Holy Eucharist, the Mass, the body and blood of Christ?

At any rate, what about the cheese?  Can we at least have consensus on that?

Maybe Pr. Junkans will clarify the matter.  Maybe the Texas District President could help.  I would be interested to know what President Harrison thinks, not to mention President Rast, as Pr. Junkans is a graduate of Fort Wayne's DELTO program.  Reverend Presidents, we need direction on this caseous casuistry matter!  Silence is not an option!

I am not being critical of Pr. Junkans.  I know the rules of the synod.  I'm not an ecclesiastical supervisor.  Nor am I going to invest the time and money to try to meet my brother face to face to confront him about omitting cheese at an otherwise perfectly good cocktail party - as scandalous a matter as that might be - especially to our brethren in Wisconsin.  Love covers a multitude of Sbrinz.

But I would like to know what those charged with ecclesiastical supervision do have to say about this.  I mean, if we can't agree on something so basic, what does it mean to walk together?

From Peter Leithart's commentary on 1 Kings 15–16:

Once Jeroboam I sets the pattern of rebellion and resistance to the prophets, Israel descends into turmoil, and the turmoil is depicted literarily in the acceleration of the narrative. . . . As a result, 1 Kings 15-16 is a school child's nightmare, the kind of chronicle that evokes lifelong loathing of history.  A king rises, a king reigns, a king sins, a king dies. . . . Meaningless and confusing dates for indistinguishable kings, all told in a colorless and repetitive prose.  The setting and events are themselves repetitive and boring. . . . Rise, reign, sin, die.  War and sin, sin and war. . . .

[T]his is precisely the author's point: idolatry is boring.  Idolatry produces nothing new, nothing exciting, nothing fresh, nothing adventurous.  Jeraboam pretends to take a walk on the wild side, pretends to be doing something slick and edgy.  His wildness is not just tame.  It is somnolescent and acts as a soporific for the northern kingdom.  Rehoboam permits high places in Judah, but that just leads to drudgery of the same.  Solomon's reign, by contrast, is full of excitement: political intrigue to secure the throne, clever sleuthing to determine which prostitute is telling the truth, a continuous party in Israel, adventurous endeavors on the high seas, a court visit from the exotic queen of Sheba.  When prophets show up, the world suddenly opens up even wider: hands wither and heal, altars are split, lions leap into the text and onto a prophet but do not eat the donkey, jars of oil never empty, dead children are raised, bears come crashing out of the woods to slaughter mocking young men, and dead bodies thrown into the wrong grave come catapulting out again.  The moon turns to blood, the sun is black as sackcloth, stars fall from the sky; dreams, signs, visions; blood, fire, and vapor of smoke.

Idols are lifeless and therefore cannot impart life.  Lifeless idols only make for lifeless people.  When the initial titillation has passed, idolatry quickly yields to dryness and death.  The signs of this spiritual exhaustion are everywhere in twenty-first-century culture, which has become a culture of "whatever" -- not only the whatever of "anything goes," but the whatever of "and who cares anyway?"  This is the end result of a culture that has been built on idols of success, money, pleasure, self-indulgence, sex.  Such a culture becomes slothful, thoroughly infused with what the Christian tradition calls acedia.

Traditionally, sloth is seen as an enemy of faith and hope.  The Latin word acedia ("lack of concern, lack of care") is used to describe these dimensions of sloth. . . . [A]cedia or sloth can coexist with frantic activity. . . . Our culture is a frenetic 24/7 culture precisely as a way of masking the emptiness of it all. . . .

This is the story of Israel and the story of humanity.  Adam thinks that seizing the fruit of the tree of knowledge will enrich his life with wisdom; it does not, but instead condemns him to an endless round of sweat and sadness. . . . Yahweh's word is the main participant in the battles of history, and it is Yahweh's (s)word that cuts into the boring round of idolatry and sin to make things new.

A Tale of Two Conferences 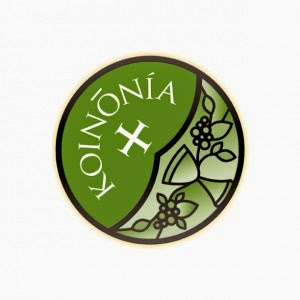 The LCMS is quite a diverse church body when it comes to things like conferences.


By way of example, here are descriptions of two upcoming conferences that will be happening shortly, less than one month apart, both of which will include speakers and worship services.

The first example is one of the official district conferences to be held this month (September).

Three of the four main scheduled speakers are pastors.  One of the three is a Lutheran, and his presentation is first.  His topic will be: "Toward Effective Ministry in Transitional Times" and is described as follows:

"Living and serving in God's grace in these changing times involves balance, clarity of purpose and values as well as personal and organizational health.  This time will be interactive, informative, and hopefully a time of introducing you to introspection and possible life ministry changes during this conference."

The two remaining ordained speakers come from outside the Lutheran tradition.  The first is a senior pastor of a Baptist congregation in Virginia.  He is the author of Bod4God: Four Keys to Weight Loss and Get off the Couch.  He is also the creator of the Losing to Live Weight Loss Competition....  The media has labeled him 'The Anti-Fat Pastor.'"  One has to wonder if he'll be attending the "Taco/Nacho/Chicken Wing Buffet (enough to call it dinner)" that includes "free beer, margaritas and sangria/wine."

Next up will be a pastor representing Cornerstone Fellowship, who is going to speak on "rediscovering a New Small Church filled with hope, passion, and innovative spark of the Holy Spirit."

Less than a month later, another conference will take place, not a district function, but rather an annual congregational event.

The keynote speaker will be a Lutheran seminary professor with degrees from Oxford, Cambridge, and Durham.  He is the "author of volumes 12 (Lord's Supper) and 13 (Eschatology) of the series Confessional Lutheran Dogmatics.  His topic will be "The Blessed Sacrament in the Theology of Wilhelm Loehe."  There will also be a discussion on "the rubrics and significance of the Mass from the Preface to the Nunc Dimittis."

Like the other conference, there will be food, including a banquet featuring "brats and beer" and an "after the party party" at the pastor's home.

This conference will likewise include worship services, and will open with "choral vespers" and will include "mass" on the next day, as well as a "low mass" and "vespers" on the final day of the conference - all held in the sanctuary of the parish.

If it is true that diversity is our strength, the LCMS must be one of the mightiest church bodies on the planet.
Posted by Rev. Larry Beane at 10:55 PM 8 comments:

Out of the barn!

The Michaelmas 2014 issue of Gottesdienst is heading to a mailbox near you (that is, if you're a subscriber; if not, click here). Here's what's inside: 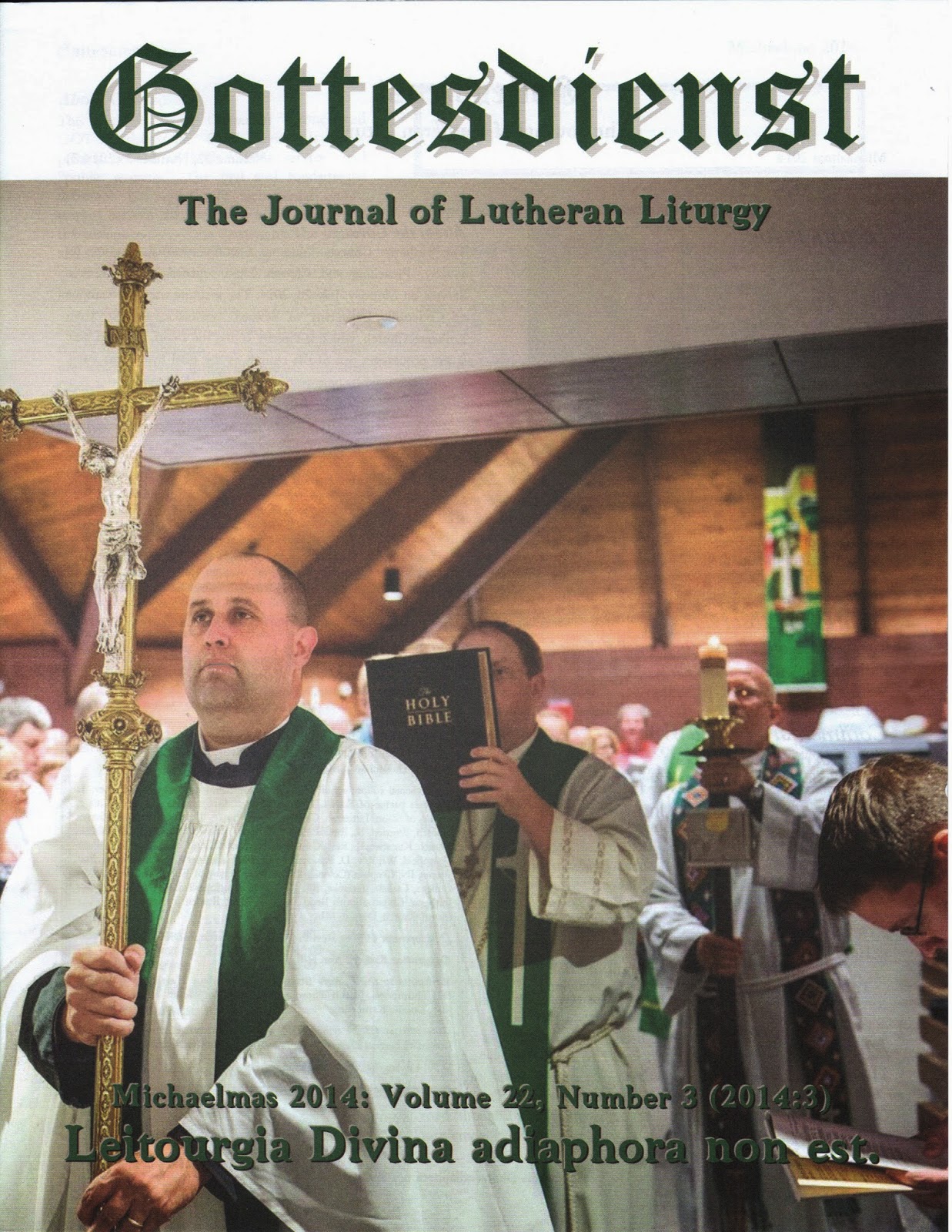 Poems
He Shall Give His Angels Charge Over You
Kathryn Ann Hill
Then Shall Arise Michael T. David Demarest

Musing on the Mysteries  Karl F. Fabrizius
The Earth Is Filled with Violence
Genesis 6:8-13