The new poll at right asks our pastoral readers (or our lay readers can report on their pastor's celebration in their congregation) which direction they face while consecrating the Lord's Supper. The traditional manner is called ad orientem - to the East. After the liturgical reforms coming out of Rome from 1960-70 many Lutherans imitated the move to a free-standing altar and facing the people - this is called versus populum. I have also seen some Lutherans with a traditional altar turn around to face the people during the consecration.
The case for a versus populum consecration, as I have heard it expounded by its proponents, is that it is more evangelical: the Words of Institution are Gospel and should be proclaimed to the people. Thus, the proper direction to face during the consecration is toward the people, as with other "sacramental" portions of the liturgy.
The case for facing ad orientem is chiefly that it highlights the eschatological nature of the Lord's Supper - "proclaiming His death until He comes." The whole congregation faces East - awaiting the Risen Lord's return, especially during that greatest miracle of His presence with us in the Supper. In this understanding, it would be very odd indeed for the celebrant to turn his back to liturgical East at just that moment when the drama of the Supper is highest and we want to express the unity of the presence of our Lord in the Supper with our longing for His coming again in power and glory from the direction of the rising sun. 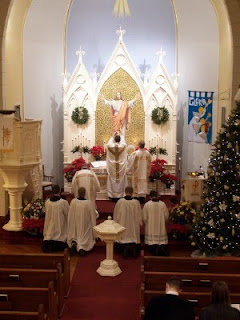 In fact, as Roger Pittelko is found of noting, the Words of Institution in the Divine Service are neither "sacrificial" nor "sacramental" language in the sense in which those terms are used in the liturgical rule of thumb "face the people for sacramental language and face God for sacrificial language." The Words are consecratory - what the celebrant properly faces at the time of the consecration are the elements. In the same way, the pastor faces the baby when he baptizes and he faces the penitent when he absolves; and when dedicating a new stained glass window, he faces the window. How odd it would be for the pastor to make eye contact with the congregation while baptizing someone at the font!
Thus, if a versus populum celebration is used, the celebrant should still be sure to direct his attention, his eyesight, and the Words to the elements, and not to the people. Our own Fr. Petersen celebrates the Supper in this way and published McClean's update of Piepkorn'sConduct of the Services to give directions for a reverent versus populum celebration 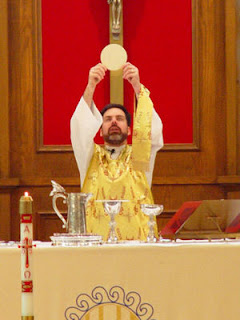 What really drives me nut, though, is when a versus populum position is taken during any of the prayers. Surely, when praying the celebrant should face the same direction as the people are facing: liturgical East, toward, you know, the One to Whom we are praying.
This brings on another problem with the versus populum celebration. When do you perform the walk around back of the altar? In the Common Service, it would make an odd break right after the Lord's Prayer - because you don't want to be back behind there for the Prayer, do you? Facing the people? Shouldn't you be praying the Lord's Prayer facing the Lord with the people instead of versus populum?
The newer LSB rites present this problem even more starkly as they are Eucharistic quasi-prayers (an Amen was tossed in before the Words of Institution to alleviate some Lutheran sensibility or other, even though many on the LSB Committee wanted to simply leave it as a Eucharistic prayer, as in the Synod's Culto Cristiano).
I was ordained in a church with a free standing altar and served there until I was called to my current parishes which have traditional altars. I always felt it odd to go around back of the altar for the prayers and was surprised at just how relieved I was when I came down here to these traditional altars.
So, if you are going to use a versus populum celebration, don't forget that you are consecrating at that point in the liturgy, not preaching to the people. Your eyes should be on the elements, not the people. Likewise with the prayers. The most awkward moment in my seminary career (and that's saying something) was when one of my classmates was performing his "practice mass" during Worship 101 at the free-standing altar in the studio chapel in the basement of Becker Hall. According to the directions given to us, he went behind the altar just before the prayers. During the prayers he was making eye contact with all of us in the "congregation." No, that's not strong enough. He was doing that American-Evangelical making love with your eyes thing. Creepy.
+HRC
Posted by Pr. H. R. at 6:31 AM