Rubrics and Their Reasons 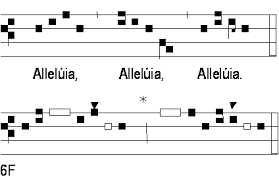 It isn't quiet out there, on the other hand. In Lutheran cyber space there's plenty of banter, more than usual, it seems. The lastest is the flap over whether or not omitting alleluia during Lent is stupid. Here's where it began. Rev. Paul McCain called the omission of Lenten alleluias "stupid," with an evident awareness that it would generate a negative response among us. "Apoplexy" was the kind word he used. And then he went on to say that for the sake of unity he follows the rubric anyhow, a remarkable admission in itself.

At first I paid no more attention than to shrug. What else is new? But today I read a brilliant response to Rev. McCain by Dcn Latif Gaba, which is a very worthy read. It positively skewers Rev. McCain. Go ahead, see for yourself, here. I'll wait.

In addition, there is a thoughtful defense of omitting the Alleluias in Fr. William Weeden's blog, a quotation from the sainted O.P. Kretzman (here), which even McCain acknowledges to be a point well made, though he dismisses it without further comment.

He might have observed that the Western Church's emphasis on penitence during Lent is a salient attribute of it over against the East, though this observation is not made to denigrate the East (which has its own salient and laudable features). Yet particular Western penitential Lenten practices are worthy of defending, such as the omission of Alleluias, or, during Passiontide, the veiling of images and the omission of the Gloria Patri. It's actually amusing to hear McCain lambasting the Western omission of the alleluias. Next thing you know, he'll be sporting a beard.

There is some merit to this, as anyone who is liturgically minded not only can but routinely does attest. That is a major reason for being liturgical: we do what the Christian Church has always done. But let's not commit dicto simpliciter and take a good thing too far. The point of rubrics, after all, is also to teach with respect to the very things they do. Not only, that is, do liturgical actions portray a uniformity with others who do them the same way; there happens to be a reason we do them which relates specifically to the matters concerning which they are done. We kneel at the altar not just to be doing the same thing together, but because Christ's Body is really there. We make the sign of the cross as Christians have done it for centuries, but the chief reason we do it is because it is the mark of the baptized. We certainly do not maintain practices we know to be stupid. As Dcn Gaba said it, "the worship of Christ our Immanuel deserves more than the merely stupid."

Moreover the rubrics, while expecting a general uniformity, have also acknowledged local circumstances, at least in a rather limited way. One of my favorite such historical circumstances is the origin, in Paris, of the elevation of the Host, in the mid-thirteenth century. The elevation arose out of the piety of the people, or of the bishops, or both, in response to the wild ruminations of one Peter the Stammerer, who (no doubt while rubbing his chin) confidently averred that the elements did not become the Body and Blood of Christ until all the words of institution were completed. In response to this the practice arose of elevating the Host immediately after the words pertaining specifically to it, as a confession against unsavory philosophical meanderings. Soon it took hold across the entire Western Church.

This brings us to certain other matters over which Rev. McCain is evidently still enduring some thrombosis of his own:

"For instance, some might think throwing themselves on the chancel floor is a great way to observe Good Friday, but we don’t do it, that is, if we care about unity. Some think putting the Lord’s Supper away in a Tabernacle on the altar and claiming it is perpetually the Lord’s body and blood and adoring it is a good thing, but we don’t do that. We know better."

Yes, it is true. Some do think putting the Sacramental reliquae in a Tabernacle on the altar is a good thing. I don't know exactly how the practice of reserving the reliquae in a tabernacle arose, but I do know it is ancient, and virtually universal in the older history of both the East and the West; so therefore there is, after all, an ingredient of unity in its retention (oddly, Rev. McCain might be obliged to agree with me on this, by his own reckoning!). But some think that in itself is still not really a good enough reason for having a tabernacle. Some think it its use is a laudable practice precisely because they claim--over against those who deny that it remains the Lord's Body and Blood--that the Sacrament is what Jesus said it was. Some think it foolhardy to say you "know better" than what Jesus said. And some find that having a tabernacle makes it easier to discover those who say they believe what Christ said about those elements, but who, when put to the test, seem more apt to believe that He only meant it temporarily at best.

See? Rubrics do have more meaning than 'unity' after all.
Posted by Fr BFE at 8:43 AM No comments:

Labels: Adiaphora, Liturgy, Rubrics; Rites and Ceremonies, The Sacrament of the Altar, worship

Rt. Rev. Dr. Paul Kofi Fynn, President of the Lutheran Church of Ghana, received the 2010 Sabre of Boldness award on January 21st, 2010, as we reported several weeks ago. The ceremony included a special military-style toast to absent comrades, given by Chaplain (Col.) Jonathan Shaw, editor of the "Sabre of Boldness" column, following which Rev. Dr. Burnell Eckardt, editor-inc-chief of Gottesdienst, announced the nominees and the winner. Dr. Eckardt's remarks at the ceremony are here.

Dr. Fynn has recently replied to us. His letter:

We just received the welcome email of January 23, 2010. I appreciate that very much. I take this opportunity to first, thank God and your Board members for honouring me with the Sabre of Boldness award.

As you well know the work we do is by God’s grace and by His power. Through this that we are able to perform whatever He wants us to do. By ourselves we cannot do anything. We continue to thank God for the faith He has created in us so that by His Spirit we will be able to proclaim God’s word in its purity. We continue to pray for strength to enable us share both Law and Gospel so that by His spirit many people will come to know Jesus Christ.

Once again thank you for honouring me. We hope we will be able to work together in future.

Dr. Eckardt's remarks at the ceremony:

Welcome to the fifteenth annual Sabre of Boldness ceremony. It may interest you to know that there are some rules which govern this event, and we try to maintain them strictly.

First, we shamelessly insist that every nominee for the Sabre must be a subscriber to Gottesdienst. But before you get riled up about that, you should know that we offer complimentary subscriptions to every nominee, lest you think this whole event is some kind of marketing gimmick. To be sure, we do think we have some pretty cool marketing gimmicks, but this is not one of them.

Second, we don’t try to give the award to someone who refuses it, which has happened: generally when it is misunderstood as an attempt to flatter someone, who might then mistakenly say, “No, no, I don’t want to be part of any self-congratulations cadre.”

Which brings us to rule number three: we do not allow anyone on the Gottesdienst editorial board to be a nominee. We are humbled by the occasional attempts which have been made to nominate us, but reminded that this award was originally—fifteen years ago—conceived in jest, and there was at first another meaning to the S. O. B. acronym. And that first meaning is the kind of deprecation we feel is probably more appropriate to ourselves.

Fourth, and this one is really important: the Sabre of Boldness is not given to the kind of person we have determined to be most worthy of all, because we know we could never make such an assessment. The Sabre lapel pin is actually two crossed sabers: one for the recipient, and the other—which is really the more important—is for all the unrecognized heroes of the faith we wish to honor. The recipient wears the pin on their behalf. We could not possibly know who they all are, but we know they are legion.

Most important among them are those who have become martyrs for the faith, who were deemed worthy by Almighty God to suffer to the point of blood. Here we could speak of Deacon Joseph Mabior, who last August became the victim of the violent Islamist campaign against Christians in South Sudan, when attackers rushed at him and shot him twice in the legs. Or we could speak of thirty men and women from the town who covered him with their own bodies in a failed attempt to protect him. All thirty died. Or the 185, mostly women and children, who also died in militia attacks there last August, apparently for no other reason than that they were Christians (World, November 7, 2009, 52-53).

Or of seven family members in Pakistan who died in August, six of them burned to death by a taunting Muslim mob that had broken into their house and shot the grandfather dead, just because they were Christians, part of the tiny Christian minority there. Or of the Christians in Iran who are routinely persecuted and ordered by government officials to renounce their faith and return to Islam.
Or the community of 350 Christians in Algeria, where Muslim extremists tried to prevent them with death threats from celebrating Christmas in their rented building only last month.

We could go on to stories from Laos, Nigeria, Indonesia, China, and elsewhere. And these are only the ones that make the news. If we are to believe the data from World Christian Database, there are in the world over 450 Christian martyrs daily on average.

Listen, the Sabre of Boldness is most especially meant to be about them, not us. And to remind us of the true nature of Christian confession—martyria in the Greek—lest we forget, amid the luxuries of American Christian freedom.

So here, in our own little way, we just pick somebody out from among us, to bear the Sabre this year, mostly for them.

Return to article.
Posted by Fr BFE at 2:46 PM No comments:

Here's an incentive: If you are currently a subscriber to Gottesdienst who can send us five names, emails, and addresses of new potential subscribers, we'll give you a free year extension to your own subscription. That's worth fifteen bucks. Just send us an email.
Posted by Fr BFE at 9:27 AM No comments: