[Ed note: Gottesdienst (the print journal) readers were treated to four top-notch sermons in the current issue, including one by Fr. Joshua J. Hayes of St. John Lutheran Church in Kramer, Nebraska.  He had actually sent me two sermons, and I went with his Trinity 18 offering.  But I also really liked his Trinity 17 sermon as well, and so I asked his permission to publish it here at GO.  If you're not a subscriber, you missed three other sermons by Frs. William Weedon, Dave Juhl, and Jay Watson - along with columns by Frs. Burnell Eckardt, David Petersen, Mark Braden, and Karl Fabrizius; essays by Fr. Peter Berg and myself, as well as a hymn by Fr. Eckardt and Mrs. Kathryn Hill. +LB]

Grace, Mercy, and Peace to you from God our Father, and from our Lord and Savior, Jesus Christ.

X In the name of Jesus. X

It was a setup from the beginning. Jesus was invited to a dinner party at the house of a leading Pharisee, but not to be their guest, but to be framed. What better way to get rid of a nuisance than to have him framed? And what better way to get rid of a religious nuisance than to trap him in his own religion. The trap was set, the bait carefully positioned, and our Lord walked right into it. The Pharisees were watching Jesus carefully, just waiting for him to spring their trap.

And what was this trap? In their cleverness and religiosity the Pharisees thought they had a good plan: Seat Jesus right in front of a poor guy suffering from dropsy—a nasty disease where your body holds too much water. Jesus, so they thought, would be stuck between a rock and a hard place. Either Jesus would heal the man and have compassion on him and thus do work on the Sabbath, or Jesus would keep the Sabbath but appear to be unmerciful and weak.

The Pharisees here are doubly despicable. It is as if they knew that Jesus would have compassion. They had come to know that that’s who Jesus is; that’s how he behaves. He is full of mercy and compassion. Knowing this, the Pharisees preyed upon Jesus’ mercy. Unlike the parable of the unjust steward who risks everything on his master’s mercy to improve not only his own situation, but also that of his neighbors and the reputation of his master, these Pharisees only seek to use our Lord’s mercy to trap and destroy him.

We pit Christ against his word and seek to use his mercy as the excuse for our sin. “Since Christ is all merciful,” we think, “there’s no real harm in lusting after women on the internet or TV.” “Since Christ will always forgive me, there’s no real problem in neglecting his word. Going to church isn’t a good work that earns my salvation, so why worry about making it there every Sunday? My Jesus is loving and forgiving; I don’t need to actually try to amend my life and love my neighbor, spouse, and children more than myself.”

Repent. Pharisees don’t care about what Christ says or does. They only want to catch him so as to have an excuse not to listen to him; to get rid of him.

But Jesus will not be gotten rid of; not by you, and not by these Pharisees. He loves you too much to let your brush him off. He walks straight into the Pharisees’ pathetic trap and springs it on purpose. He says, “Is it lawful to heal on the Sabbath, or not?” The Pharisees are silent. Now Christ has put them in their own trap and they know not what to say. They cannot but condemn themselves. We cannot but condiment ourselves. But though it will cost him his life, Christ will not leave you sick in the dropsy of your sins, but will heal you even if it means letting the devil have his way with him.

This is what Jesus does. He does not run from danger, but meets it head on. He does not run from the cross, but goes willingly to his death. The cross was the trap which the death and the devil had laid, and Christ sprung it to set you free. He lays down his life when he wants, and he goes free when he wants. On Calvary Christ laid down his life to save yours. Here at this Pharisaic dinner party, Christ walks straight into their trap and right out on the other side. At the cross, Christ walked into the devil’s trap and let him win, but came out on the other side that first Easter morning.

Beloved, we have not been called to bear the name Pharisee, but rather Christian. And Christians you are, for you have been put into Christ. He, the one whom heaven and earth cannot contain was willing to be contained in the Virgin’s womb for you. He, the one who knows all things and sees all things was willing to grow and be taught the word of his Father for you. He, the one who humbled himself to death, even the death of a cross to raise you back up to the Father. Jesus has humbled himself and exalted you.

And see how high, dear Christian, your Jesus has exalted you! Your status is higher than any celebrity, any movie star, president, prince, or politician. For you have been called be a regular diner at the table of the King of kings.

There was once a man who had a funny name. His name was Mephibosheth. But worse than the awkwardness of his name was its meaning: “disgrace comes from my mouth.” He was disgraced because he was the only survivor from the family of a deposed king named Saul. And worse, yet, he was lame in both feet.

Mephibosheth should have been killed on the spot. That’s what you do with pesky relatives of former kings. You don’t want them coming after your crown, so you dispose of them. But it just so happens that Mephibosheth, disgraced as he was, lived under the rule of a gracious king: king David. David wanted to have compassion and mercy on his enemy, and so he exalted lowly Mephibosheth and restored all Saul’s lands to him. And more than that—David invited Mephibosheth to eat always at his table. And when you eat at the king’s table, your status is secure.

And so we read in 2 Sam. 9 that Mephibosheth ate at the king’s table, just like one of the king’s sons.

Beloved, today the Son of David, Jesus Christ, king of all creation, invites you to eat as his table, like one of the king’s sons. For this is what you are: Sons and daughters of the king.

Don’t you see? It was a setup from the beginning. All that Christ has done he has done to bring you’re here—to be a guest at his table; that you may dine with the everlasting king and know that your status with him is secure.

The peace of God, which passes all understanding, keep your hearts and minds in Christ Jesus.
Posted by Rev. Larry Beane at 9:50 AM 9 comments:

Out of the Barn! 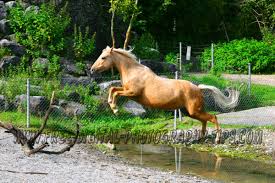 The horse has been out of the barn for a couple of weeks already, but actually, it's more like a team of horses.  Most of the copies of the Michaelmas issue of Gottesdienst were released in late August; and today, the rest went out. Our new printers take the spreadsheet we send them and then they send the issues out to individual subscribers.  Any subscriptions that have more than one copy in them, or that are out-of-country, went out today, from here.  It's still a bit of a horse race, however, because the individual issues get sent via media mail, which can be slower. What's odd is that some of our readers actually get  to see the finished product before some of the editors do.

And what's really odd, and sad, is that some people will never see the finished product because, well, they're not subscribers.  Yet. 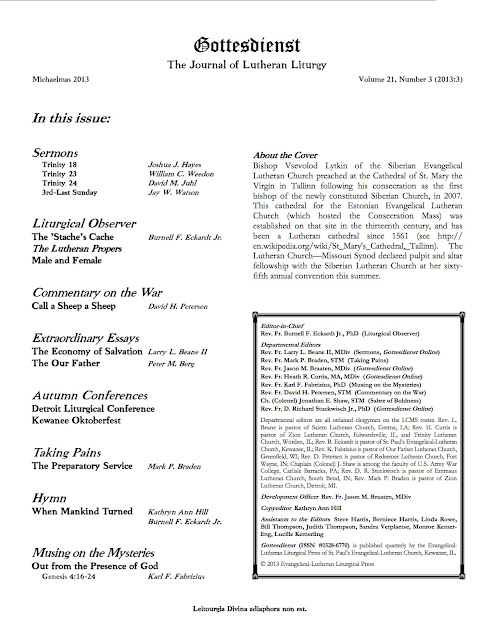