Teach us, Augustana! - Now with Classes I and II

The Rev. Fr. Gaven Mize, pastor of Augustana Lutheran Church in Hickory, NC, lecturing in a live video streaming series on worship: "Teach us, Augustana!" (An Introduction into Catechetical Aesthetics in God's House).

This is outstanding stuff! 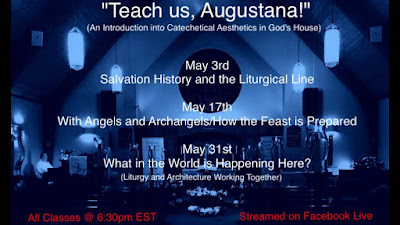 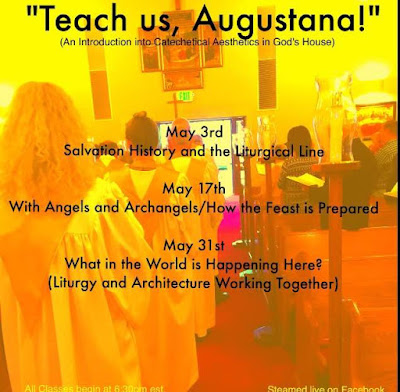 LCMS President Matthew Harrison speaks regarding the LCMS 4-06A Task Force and licensed lay deacons leading up to the Synod's convention this July.

You can view the other presentations from this conference by visiting Gottesdienst’s YouTube channel.
Posted by Jason Braaten at 8:17 AM No comments:

Another Successful Conference Concludes, and a Video Project Begins 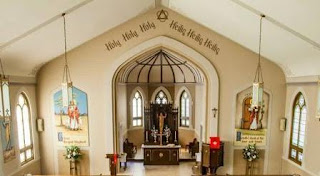 The crowd at St. Paul Lutheran Church in Hamel hovered around 100 guests, and by all accounts our second Gottesdienst -- St. Louis event, "Removing the Asterisk: Restoring an Unconditional Subscription to AC XIV in the LCMS" was a great success (even if we don't have any photos -- yet).

Pastor Jason Braaten delivered a stellar review of the history of the Missouri Synod that got us to this point, seeing uncalled and unordained men serving as "pastors," disregarding the 14th article of the Augsburg Confession.

LCMS President Matthew Harrison addressed the assembly early in the afternoon, detailing the importance of this issue, and why it matters. His participation, as well as the participation of several other Synodical representatives, made the event all the more informative and helpful to the attendees, a great many of whom are delegates to the upcoming convention.

Pastor Heath Curtis then helpfully, frankly, and carefully led the guests through the recommendations of the task force appointed as a result of the 2013 LCMS convention, to be reported at the next convention, to be held in Milwaukee this July. In short, the task force is recommending an end the the licensing of lay men to carry out the functions of the ordained ministerium, though with care to see to it that those who are currently in those situations be led to be examined, called, and ordained. The LCMS is also recommending that funding be appropriated to help these men and their parishes toward those ends.

Your humble scribe then presented a paper providing a Biblical case for the importance of ordination, stressing also a key ingredient in the task force report, that of the three parts of the 'rite vocatus' (regular call) mentioned in AC XIV, viz., examination, call, and ordination, "none is negotiable or unnecessary."

Two periods of discussion were allowed, and the discussion seemed lively and edifying.

The conference was accompanied, as are all Gottesdienst conferences, with opportunities for worship. Chief among them was the Divine Service. Due to a generous grant from the Lutheran Church--Missouri Synod, we were able to videotape the service, and we are pleased to announce that we are now in the midst of carrying out at last our plans to move forward with the production of a training film for seminarians and pastors. So while we don't have any photos of the event, we expect to have some video coming your way in the not-too-distant future. Stay tuned.
Posted by Fr BFE at 5:06 PM 2 comments:

We are making final preparations for our conference on May 17th. Please see the post below and get your registrations in. Our hosts in Hamel, IL (40 minutes north of St. Louis) are very gracious, but the conference space can only hold so many - so don't delay in reserving your spot. And remember: 2016 LCMS Convention delegates will have the registration fees waived.