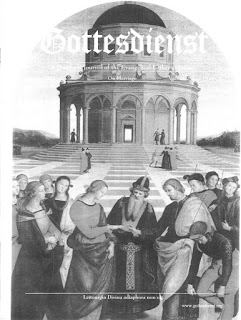 We finally got around to posting most of the material in our wedding issue of Gottesdienst, published back in 2003. You can browse and see them in the archives section of our regular website. 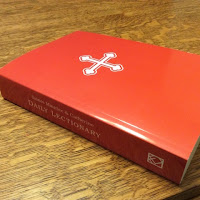 [Note: this is a guest review originally posted here.]

Matthew Carver (he of the Walther Hymnal and the Herberger goodies) shared with me his latest: Saints Maurice and Catherine DAILY LECTIONARY.

That is, the complete set of office readings indicated in the Cantica sacra of the (Lutheran) Magdeburg Cathedral, 1613. The Cantica sacra is a work of some wonder, providing complete instructions for ALL the daily services (Offices and Mass) at the cathedral (Mass was every Sunday, Tuesday and Thursday, but also any saint day or festival; the daily office was, well, DAILY). But the readings are only indicated in the work.

Here, Matt has put them all together in a single volume, using the majestic language of the Authorized Version. Sunday nocturnes for Matins (Vigils), and then readings for each Lauds (Matins) and Vespers on week days, and propers for the saints days. If you put this volume together with the Brotherhood Prayer Book you have a complete and thoroughly Lutheran breviary. Matt points out how the readings largely fit with pre-Reformation schemes, but are expanded. The Apocrypha is not neglected. There are weekday readings in the later Trinity season for Judith, Tobit, and 1 & 2 Maccabees. It's a volume I recommend highly to anyone who wants to "let the Word of Christ dwell in you richly" and particularly to any who regularly use the Brotherhood Prayer Book.

You can find it here!

Father Weedon is the Director of Worship for the Lutheran Church - Missouri Synod and the Chaplain of the LCMS International Center
Posted by Rev. Larry Beane at 10:38 PM No comments:

Our annual liturgical calendar comes out soon in the print edition for Christmas, as it does every year, and we are pleased also to announce that the 2016 calendar is also available online. Not a subscriber yet? Take care of that by clicking here, in time for that Christmas issue which is soon to go to print.
Posted by Fr BFE at 12:34 PM No comments:

Rev. Lincoln Winter: Should I Go on Sinning?

There is a really helpful post over at Musings of a Country Parson.

Yesterday in Bible Class we were talking about providence and sin. On the one hand, God can use anything – even the works of Satan – for his own glory. (Cf. John 11:51) And yet, we can not say that sin is ever a good thing. We can see in others the redemption God gives from sin, and the freedom that the Gospel offers for those who are sinning. But we dare never think that this makes sin a good thing – especially in our own lives.

There is always the temptation to misunderstand what Paul means in 1 Timothy: “The saying is trustworthy and deserving of full acceptance, that Christ Jesus came into the world to save sinners, of whom I am the foremost.” Correctly understood, Paul is, I believe, making a liturgical confession. This is not just Paul speaking. It is a “Saying”. That is, it is a known formula. If I were guessing, I would say it is likely Baptismal. Unless one is willing to admit “I am the chief of sinners, and Jesus came to save me from my sins” salvation can not be given. That confession, made in the context of Baptism, is nothing more than what we say today in the Baptismal rite, and in the various rites of confession.

However, there is a much more dangerous interpretation of this verse that actually leads us away from Christ, while claiming to be super cross-focused. It goes something like this: “Look at how bad a sinner Paul was, and yet he was an apostle. Therefore since I am also a super-bad sinner, I am almost as qualified as Saint Paul, and certainly more qualified than others to speak of the meaning of the cross.” I have seen this most often used among those who, once upon a time, were popular teachers in the church, but have fallen into some sort of great shame and vice, which then became public. One might call this “Disgraced Televangelist Syndrome.” (These days, they are more likely to be internet stars, but you get the idea.) The ‘televangelist’, riding a wave of popularity, is suddenly caught in some great sin (For the wealthy, it is usually embezzlement. For the merely popular, adultery.) After a short time, they re-emerge, telling us that before (ironically when they were fit for ministry), they only thought they understood the Gospel. But now that they are disqualified from teaching in the church, they have so much deeper an understanding of the cross, they now must shout it from the rooftops (or on TV or in books, with links to purchase their product available at the end of the article/show, etc.)

Sometimes, they will even go so far as to say that their sin was actually good for them, since they now understand the Gospel better. And that is how you can tell they are the same false prophet they were before, when they damaged the church with their scandalous sin. Even if, in all other respects, they are faithful, they are peddling a damnable lie. You see, Satan in the garden did not simply invent some new heresy out of whole cloth. He twisted the Word of God. His lies always have a bit of truth in them. That’s what makes them believable. To Adam and Eve, the lie was this: Your sin will actually be a good thing! You will understand good and evil so much better if you sin.

This is the exact same thing we are told by the ‘reformed disgraced televangelist’. His sin was a good thing. He is much better prepared to speak of Jesus than he was. (With obvious unspoken implication “And also better than your own pastor who does not have great and shameful vices like mine.”)

We may say, “I am forgiven by the grace of God from my sins. It is an amazing thing to be forgiven.” We may say of others, “See how the grace of God works through him, who once was a sinner.” We may say of God’s providence, “You meant it for evil, but God meant it for good.” But if we move toward saying, “The sins which I commit have been good for me,” then we have abandoned the truth for a lie. We are only ever saved in spite of our sin. Sin damns us. And we must never speak as if it is any other way. It is not a way to more properly understand the cross. And, perhaps it is partly because of this very tendency among the ‘reformed disgraced televangelist’ that scripture says such men are not to again teach the church. Not because their sin can not be forgiven. But because being returned to a place of authority in the church carries too much risk to their own soul.

So what do we do with the skilled, but disgraced televangelist? Encourage him to hear and learn God’s Word, but recognize that it is no longer given to him to teach. If that’s not clear to him, we can point especially to the words of Saint Paul in 1 Corinthians 9. “But I discipline my body and keep it under control, lest after preaching to others I myself should be disqualified.” We want those words to be godly advice for our brother, not prophecy.
Posted by Petersen at 10:37 AM 2 comments:

Ribbons for the Compact Treasury of Daily Prayer 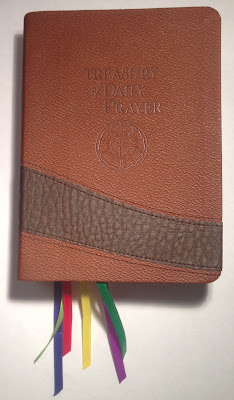 The Treasury of Daily Prayer is a helpful resource for pastors and laity; for groups, families, and individuals to enjoy the blessings of the disciplined prayer life offered by the Daily Office.  The TDP includes breviary readings from Holy Scripture (with emphasis on the Psalms), and devotional writings from the range of the Church Catholic, from the early fathers, through the Reformation and the Lutheran Confessions, to meditations written by modern saints of the church - mainly from our Lutheran tradition.

The original TDP came with standardized ribbons and a page explaining a suggested way to make use of them.

One of the few downsides of the original TDP is its size.  So a user-friendly smaller-sized compact leather edition came out.  However, this one lacks the ribbons as well as the page explaining how to use them.  I'm not sure how one can really use the TDP without some kind of marking system, perhaps sticky flags (which can sometimes damage the print).

Well, my dear wife Grace came to the rescue.

She bought materials and designed a custom set of ribbons that fits perfectly into the spine of the smaller-sized TDP.  She sewed it together, trimmed the ribbons, and treated the edges to prevent fraying.  Upon request, she made one for another member of my parish.

I asked if she would consider making it available to others for a small charge.  She graciously (see what I did there?) agreed to make them and sell them for $5.00, shipping included.  So if you would like one, please e-mail Grace at gracebeane@gmail.com. 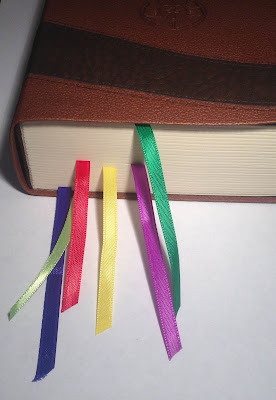 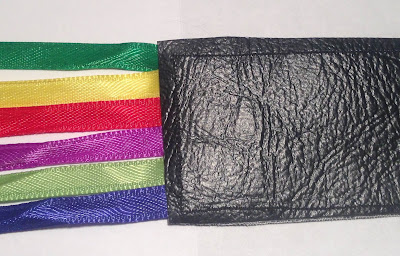 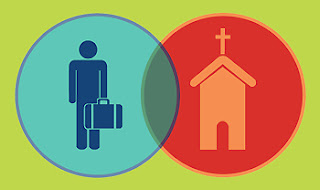 With the steady increase in bivocational ministry, why is it that worker-priests and their congregations are denied the franchise in synod elections simply because their pastors have to work and are unable to attend their district conventions?
Posted by Rev. Larry Beane at 5:28 PM 3 comments: