The problem is not with your mailman 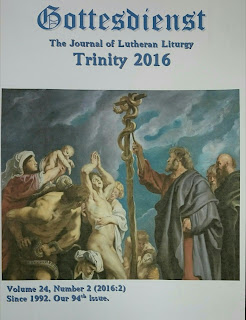 You might have noticed that the Trinity issue of Gottesdienst is delayed a bit. It's all ready to go, chomping at the bit, but we are holding the steed back for a couple more weeks, in order to tend to pressing LCMS convention matters at hand. No need to inquire about your subscription (unless, of course, you know you don't have one, in which case, well, you can easily do something about that). We do promise to get all caught up soon: the Michaelmas (late September) issue is still on schedule, which means that although Trinity is late, the next issue should be on time. That's the plan, anyhow. Sorry about the great chagrin this will no doubt cause among our eager and expectant readers, and thanks for your patience.

We rejoice with Rev. Matthew Harrison in his reelection as President of the Lutheran Church - Missouri Synod. As I said before, he is a lifelong advocate of reverent worship and is faithfully leading our Synod toward compliance with AC XIV. I also said that this election was a referendum on AC XIV and the plan to end the Licensed Lay Deacons program. The other two candidates were for the LLD program and against the Harrison team's plan to end it. But Harrison was reelected, resoundingly.

How resoundingly? Let's do the math. From the official press release.

For President:Matthew C. Harrison3,507 votes (56.96%)
Total Votes Cast: 6,157
So there were a total of 1,191 people who chose not to vote. What if all of them had voted for the second place finisher? Then his vote total would have risen to 3,448. Still short of the Harrison mark. And, of course, it's folly to assume that 100% of the outstanding votes would have gone to any one candidate.
The presidential electors are the widest possible representative vote we have in our polity. The delegates to the convention, a group about 1/6 that size, should hear this message loud and clear.  As should the floor committees putting the final touches on various resolutions - especially the LLD resolution (13-02). Harrison provided direct leadership on this (see his speech from our conference), even while a full third of the COP were signing letters questioning his leadership, and truly scurrilous attacks were being made against him by former officials. Now the Synod has spoken.
So be bold, Floor Committee 13. Be bold, delegates. Tippicanoe and AC XIV too!
Posted by Jason Braaten at 10:43 AM No comments:

The LCMS is blessed to have a large number of faithful men who would be capable of leading the Synod. The three men who will appear on the ballot for President of Synod at the end of this week are all long-time servants of the church, who would put their sincerest efforts into the position. Each is a man of faith who chose to enter the service of the Church even though his talents could have brought better pay and lower stress in the secular world. They all deserve our thanks.

It almost goes without saying that I support Rev. Harrison in his reelection and will be voting for him on June 11th (voting is open June 11-14). He recently spoke at one of our Gottesdienst conferences and has been a supporter of reverent worship for his entire career. So why bother with an endorsement like this in print? Two reasons.

First, I want to encourage like minded electors, pastoral and lay, to take the time to vote. If you've been paying attention to your inbox this week, you will know that they are efforts in various corners to support one of the other candidates. Every vote will count and there are 2700 fewer voters registered than there were in 2013. Apathy is always bad for the incumbent. Please vote!

Second, the most crucial topic at this convention is the resolution to fold the licensed lay deacon program into routes that lead to call and ordination. This is a pivotal issue. President Harrison supports it, along with both seminary faculties. Yet, the CSL seminary president, who is also on the ballot, does not publicly support his faculty in this regard. And the other man on the ballot has forthrightly and publicly opposed the plan to bring the LLD program to a godly conclusion.

The fact that Rev. Harrison stands with the seminary faculties in saying it's time to bring the LLD program to a close and thus bring the Synod's practice in line with AC XIV while the other two candidates oppose the plan, makes this election a referendum on AC XIV and the necessity of a call to the Office of the Ministry. 7300 pastors and laymen will have the opportunity to cast their ballot in this referendum at the end of this week. If you are an elector, I hope you will demonstrate your support for AC XIV by casting your ballot for Rev. Harrison.
Posted by Jason Braaten at 11:21 AM 1 comment: