I'm a young pastor struggling to introduce chanting into my parish. I remember reading an article in Priestmen's Quarterly about how Fr. D. Jewel was able to restore the mitre to the procession on feast days by first wearing a bowler, then a fedora, etc., while slowly morphing them into the shape and coloration of a mitre. A couple of years later and, voila, he had some headgear that confessed the unitary nature of the Office. Can something similar be done with chanting? - Muddled in Minnesota

But where would one begin? With the mitre there is an obvious Ur Hat that can be modified. It is reasonable that a hat loving pastor would perhaps forget to take off the fedora for Mass, thus giving space for the mitre transformation (though the Fedora Transfiguration gambit was pushing the envelope even for such a priestman as Fr. Jewel). But with chanting the only place to begin would be the Talking Song - and from that there is no escape. Indeed, I have seen with my own eyes some poor vicar reading Psalm 23 in the most heartfelt manner while the organist played The King of Love My Shepherd Is with the stops marked "1950's Melodrama" fully open. This will not give way to the Church's historic chant - that poor vicar may even now be praying ex corde while his guitar gently weeps.

There are some things only Johnny Cash can or should do.

All the Best,
The Priestman

PS: Other pastors with some musical talent have attempted to soften up the congregation to the idea of pastoral singing by entertaining congregational gatherings. See "Wee" Willy Wildon's, "Potlucks and the Ivories -or- Chords and Bar Cookies," in A Priestman's Way: Essays in Honor of the Author. The ebook version has video footage of Wildon plying his pianic priestmanship.


Ed. Note: Questions may be addressed to priestmanship@gmail.com.

Rt. Rev. Dr. Paul Kofi Fynn, President of the Lutheran Church of Ghana, has been elected by the editors of Gottesdienst to receive the 2010 Sabre of Boldness award. Dr. Fynn, upon gaining theological training and steadfast dedication to confessional Lutheran theology in the United States, gave up a lucrative job with the Chicago Tribune and returned to his native land to help and shepherd the church there. In a severely resource-constrained environment, and at great personal cost and risk, he has consistently found ways to provide for the sound preaching of the Gospel and the faithful administration of the Sacraments. Often under duress and without sufficient support, he has disciplined those unfaithful to Lutheran practice and has actively supported the exercise of genuine pastoral care.

He was chosen from among four nominees, all of whom were considered "stellar." The other three:

Monique Miller, wife of the Reverend Philip Miller, a pastor in New Orleans. The Miller family lost everything in Hurricane Katrina, but elected to stay with their devastated parish. More significantly, Mrs. Miller is the mother of six young children, and has suffered four miscarriages. Her pregnancies, while not life-threatening, have nonetheless been difficult and debilitating, sometimes requiring hospitalization. Last year, in spite of this, she quietly and humbly disregarded the world’s usual and predictable advice, and instead received the blessed cross of another pregnancy, in the bold hope of presenting her husband, the Holy Church of Christ, and her God with a candidate for Holy Baptism and heir of life eternal.

Rev. Linden Wendzell, of Sabeka, Minnesota, who was forced out of his parish in Royalton, Minnesota, when conspirators in the parish succeeded in gaining enough support for his removal, after seven years of discontent resulting from such things as his consistent and dutiful refusal to allow open communion, and his pastoral admonitions to unmarried couples living in sin. Rev. Wendzell was no stranger to such perfidy, as it had forced him out of his previous parish after he had served faithfully for twelve years there.

Rev. Joseph Randrianasolo, PhD, professor at the Lutheran Graduate School of Theology in Fianarantsoa, Madagascar, who was removed from his position as academic dean by administrators who preferred the funding of the Lutheran World Federation to the bold theological stance he took for Confessional Lutheranism and against the ordination of women. Dr. Randrianasolo and his wife have also been involved in the Good Samaritan project which feeds 200 hungry children with rice every week. Though a small minority voice on the faculty, he continues unwaveringly to uphold confessional Lutheran theology in a hostile setting, and in a land beset by the challenges of an indigenous paganism.
Posted by Fr BFE at 7:44 AM No comments:

The nominations for the Sabre of Boldness are still open. Send your nomination in right away, though, since there's only about a week to go.

For the fifteenth year, the editors of Gottesdienst will meet in Fort Wayne on Thursday night of Symposium week (January 21st, 2010), to choose and announce the recipient of the annual Sabre of Boldness award. To nominate, state the name, address, telephone number, and email address, if you have it, of the nominee and the reasons why he or she is a fitting choice for Sabre Bearer. The words engraved on the plaque upon which the Sabre is mounted give the selection criteria: “For conspicuous gallantry and intrepidity on behalf of the Holy Church of Christ while engaged in the confession of His pure Gospel in the face of hostile forces and at the greatest personal risk.” The degree of the adversity, a demonstration of steadfast resistance to pressures to compromise the truth, heedlessness of threatened personal consequences, and a clear confession of the truth at stake are considered. The slate of nominees will close on Wednesday, January 20th, 2010. Then the editors of Gottesdienst will meet privately to make their selection, and the announcement will be made after the Symposia banquet.

THIS YEAR the location of this event is the La Quinta Hotel, which is near the seminary campus (from the Seminary, take Clinton Street north a half mile to Auburn on the left; take Auburn about two miles to Du Pont Road, turn right and go less than half a mile. La Quinta is on the right (south) side of Du Pont Road, near the I-69 interchange. Here's a map).
View Larger Map
Posted by Fr BFE at 1:42 PM No comments:

Of Calendars and Priorities 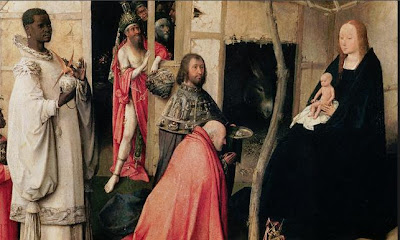 No room at the Calendar.

The historic Christian calendar is an adiaphoron. One man considers one day holier than another and one man considers all days equal. Let them both do it to the Lord's favor. Celebrate Christmas on Dec 25 or April 17 - or not at all. You are neither more nor less likely to end up in hell whatever you choose.

That is the truth. The bare truth. The truth of refined theological thought in philosophical repose. We mere mortals, however, must live in the flesh. And here in the flesh our fathers (even the man who wrote that bit about considering one day holier than another) worship on the first day of the week as dimanche, domingo, dies Domini. And we celebrate Christmas on Dec 25. If some don't want to, that is free. But surely it would also be against the law of Christian love for a Christian boss to disregard his brother's wish to worship on Dec 25 and require poor ol' Bob Cratchet to come in as usual - to require him to regard Dec 25 as just another day while he wishes to keep it as more holy than others.

At any rate...this came to mind as I had some trouble scheduling liturgical assistants for this Wednesday. It would seem that some required workshop or another at one of our Synod's institutions of higher learning could find no other night than January 6. Nothing going on that night anyway.

Perhaps this is just the last indication that the celebration of non-Sunday festivals is dead. Epiphany, Ascension....how long before Christmas is transferred to a Sunday regularly?

Again: all this is free in Christ. But I can't help thinking that an important battle of priorities has been lost nonetheless. I don't think it's Gospel freedom that's driving this...though it will no doubt be used as an excuse.