Does faith justify if accompanied by vice?

From this month's Gerhard translation work. The forthcoming volume On Justification is a must read. So many of our contemporary questions, especially regarding the Antinomian/Radical Grace strains within today's Lutheranism and wider Evangelicalism, are dealt with in fine detail.

Bellarmine [Gehard's Roman Catholic opponent....seeing in advance the ground that the Radical Grace folks would tred] retorts: “If faith, separated from the other virtues, were able to justify, it could also do this in company with the vices which are contrary to the virtues. After all, as the presence of the other virtues does not benefit faith for the work of justifying, the presence of vices will not hinder it, because they are connected with it accidentally as are the virtues.”
We respond. The word “alone” has to do with the predicate. Faith, to the extent that it justifies, alone accompanies this act. Meanwhile, justifying faith is not alone; much less does it exist with vices, that is, with sins against conscience. How, then, would it justify with vices? Acting presupposes being; but faith does not exist with vices; therefore it does not justify with vices. Faith separated from virtues does not justify because it does not exist without virtues. Yet still it does not communicate the power to justify to the virtues and this [faith] alone justifies.


And a little more...Radical Grace has always been how Calvinists like to describe "once saved, always saved." It's not Lutheran.

[Bellarmine] brings this forth from Calvin: “the seed of faith remains amid the most serious lapses.”
We respond that the Augsburg Confession (Art. 12) explains our opinion clearly against the Anabaptists, that “once justified, people can lose the Holy Spirit,” namely, through sins against conscience. Therefore justifying faith and sin that attacks it cannot stand together at the same time. 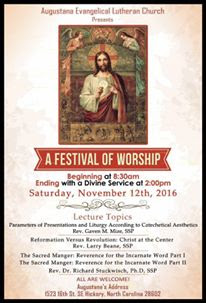 Augustana Lutheran Church in Hickory, NC hosted a great one day conference Saturday, November 12, 2016 in the beautiful nave of the church.

Augustana's pastor Father Gavin Mize is a great friend of Gottesdienst, having been published in both the print journal and online.  The narthex of Augustana has a stack of Gottesdienst for parishioners to pick up.

Pastor Mize opened the conference with an introduction: 'Parameters of Presentations and Liturgy According to Catechetical Aesthetics":

The next presentation, "Revolution Versus Revolution": Christ at the Center was given by Gottesdienst editor the Rev. Larry Beane:

The keynote address of the conference, "The Sacred Manger: Reverence for the Incarnate Word", was given by Gottesdienst editor the Rev. Dr. Richard Stuckwisch in two parts:

The Festival concluded with a Divine Service, a commemorative Mass of St. Jonah the Prophet, which Pastor Mize streamed live via Facebook:

The sermon was preached by Pastor Beane:

As a bonus, the following morning, Dr. Stuckwisch preached at the Sunday parochial Mass at Augustana for the 26th Sunday after Pentecost:


Thank you to the delightful and faithful people Augustana Lutheran Church, who provided Southern hospitality and cooking along with making this conference happen free of charge. Thank you to Pastor Mize for leading this wonderful event that taught, in word and by example, the concept of catechetical aesthetics in the context of the Lutheran liturgy!
Posted by Rev. Larry Beane at 11:27 AM No comments:

Out of the barn! 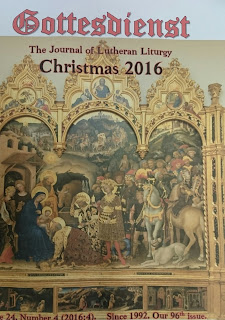 The Christmas issue of Gottesdient is on its way to the mailboxes of subscribers! Not on the list of Gottesdiensters? It's easy to fix that today. 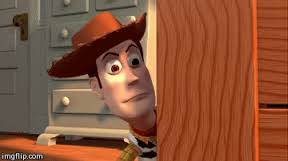 The words of Randy Newman, memorable because of their inclusion in the iconic Disney film Toy Story, come to mind with ease in this surreal year of 2016.

As of early this morning, the Chicago Cubs are World Series Champions, so hell must also have frozen over.
And this in the midst of a presidential race that is utterly remarkable, pitting Donald Trump, of all people, against Hillary Clinton, of all people. It has been a wild several months, and with days left before the election, we have grown to expect strange new twists each day.
Two years ago we could scarcely have foreseen the possibility of the Cubs ever breaking the curse, and this presidential race is a phenomenon unlike anything I can remember.
So this seems also a fitting year for the Pope to come out and praise Martin Luther when visiting Sweden the other day. He actually said that the doctrine of justification “expresses the essence of human existence before God,” though he didn't say anything about what he meant by that. And granted, this comes from Frank the Hippie Pope (a brilliant moniker from Rev. Hans Fiene), who routinely manages to say things that leaves the curia scrambling in damage-control mode. But still, it is unprecedented that the head of the Catholic Church should speak in such glowing terms, even beyond the sentiments of his predecessor, about Martin Luther. Wasn't he excommunicated, after all, and his books burned?

There was at this gathering an ecumenical prayer service that stressed, among areas of agreement, the need to work for world peace and justice. These strike me as code words, in a way, for an agenda of social reform that is generally bereft of, and sometimes inimical to, the doctrine of the Gospel as we know it. Mention was also made of the importance of being welcoming to immigrants, which, while on the surface sounds just like what Christians ought to do, seems to have politically leftist overtones in harmony with those who are pushing for open national borders. I might not be so cynical were it not for the fact that these matters were brought up in the very context of Martin Luther and justification. At the least it's anachronistic, and at most a gross misrepresentation of things that mattered to him.
I'm also reminded of the agreement that was reached in 1999 when representatives of Rome met with Lutherans and produced a joint Declaration on the Doctrine of Justification, in which it was agreed that "by grace alone, in faith and in Christ’s saving work and not because of any merit on our part, we are accepted by God and receive the Holy Spirit" (DDJ 15), but at the time I wryly noted, as did many others on both sides, that this was really nothing new, since it did not change either position. Both sides have always agreed that grace alone is the force behind salvation; where they have not agreed is whether or not we may speak of a kind of merit (meritum de condigno is the official term, I believe) that proceeds from grace and enables us to believe: an intervening merit, in a way, between grace and faith. For Luther all talk of merit is out of the question in connection with justification. Not so for Rome, if one carefully parses.
But I don't think anyone involved is thinking too seriously about justification at all.

In any case, this ecumenical fervor that is making "Lutherans" excited about the prospect of a future reconciliation with Rome is actually coming from Scandinavians allied with the likes of such Lutheran World Federation, which is, shall we say, not known for confessional integrity. The Lutheran Church of Finland has actually persecuted confessional Lutheran Pastors in Scandinavia, as Gottesdiensters may well remember.
So if we indeed are, as the pope put it, to move past "controversies and disagreements that have often prevented us from understanding one another,” then perhaps I may be forgiven if I am led to wonder whether he means moving away altogether from such things as the matter of justification by faith, and on to the the "more important" matters that ecumenical leftists like to talk about. And if this is true, then those of us who might object will quickly be dismissed as being still bound to "fear or bias with regard to the faith which others profess with a different accent and language.”
If the year 2016 is curious, the year 2017 may be curiouser and curiouser, not least because it marks the 500th anniversary of the Reformation. I would not be surprised to see, though I hope I do not see, the emergence of a feigned rapprochement that will leave us who seek a genuine doctrinal unity not only disappointed, but cast aside and even persecuted. It has already happened to some.
Posted by Fr BFE at 4:30 PM 1 comment:

A Festival of Worship in Hickory, NC 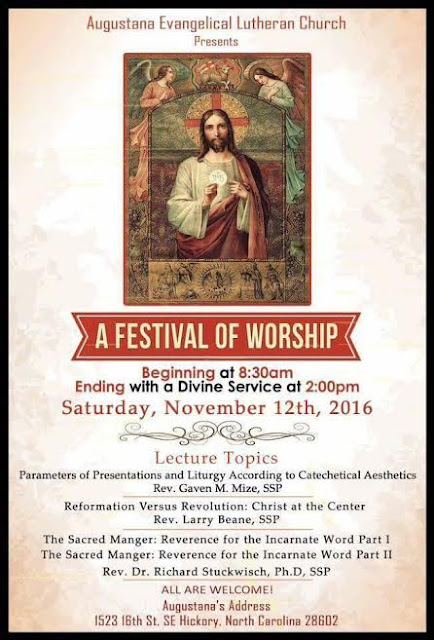 Though not an official Gottesdienst event, two of our editors will be speaking.  For more information, contact Father Gaven Mize by email or Facebook.
Posted by Rev. Larry Beane at 11:36 PM No comments: 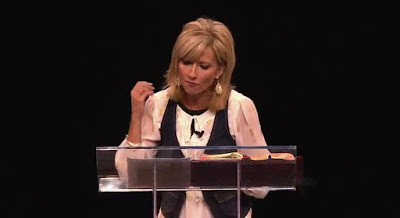 Salem Lutheran Church (LCMS) will be hosting Baptist Evangelist Beth Moore of Living Proof Ministries.  She will be speaking in the "worship center" following an Advent brunch.

Here is a link to some of Beth Moore's sermons.

Just to be clear, this isn't Salem Lutheran Church in Gretna, Louisiana, where I serve.  This is a SLC in Tomball, Texas.

Instead, we'll be hosting the Lutheran bishop of our sister church, the Siberian Evangelical Lutheran Church, the Rev. Vsevolod Lytkin, late in January.  He will speak in our parish hall and preach in the sanctuary during the Sunday Mass.  More specifics to follow.  Feel free to contact me by email or Facebook for more information.

Here is a link to some material on Bishop Vsevolod's remarkable journey from growing up in the USSR, his conversion to Christianity, his odyssey traveling thousands of miles by train to be baptized, his ordination and consecration, and ongoing life as a bishop, pastor, preacher, and evangelist, as well as sermon excepts from my blog.

More about the bishop and the SELC is available at the Siberian Lutheran Mission Society website, especially the newsletter archive. 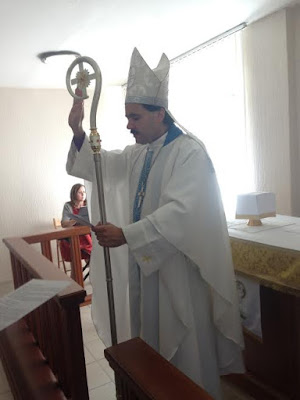 Posted by Rev. Larry Beane at 8:53 PM No comments: