Thanks to the Lutheran Witness, those of you outside the gravitational pull of Zion on the Mississippi have now been introduced to Crave/Christ in the City.

Sigh. Where to begin?

Gottesdienst is a journal of the Evangelical Lutheran Liturgy. Crave is a coffee house/worship center dedicated to the proposition that no such thing need exist, and is probably counter-productive. It's been quite controversial amongst the area clergy. Why? Well, I wasn't kidding when I called it a coffee house/worship center. Kind of like how Optimus Prime* is both a robot and a semi truck. To wit: 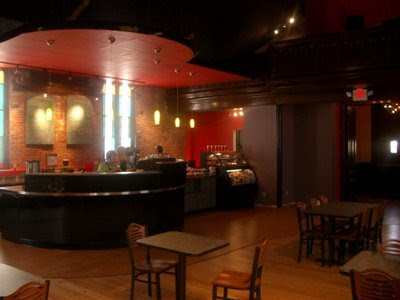 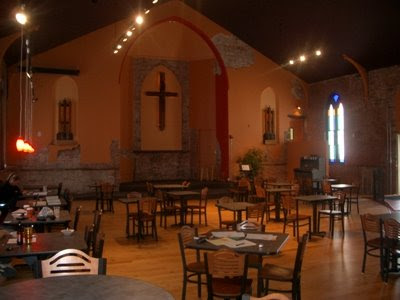 ....and move the tables and voila - C2 worship center.

This is the former Christ Evangelical Lutheran Church in the Gate District neighborhood of St. Louis. The congregation was running down, so a group of local Lutherans decided to reinvigorate the parish and reach out to the community. They decided to do this by remodeling the inside of the sanctuary to serve as a coffee house, which could also serve for worship. One can clearly see the outlines of the old chancel and altar area above. If the photo above leads you to think that that is still what that area is used for, you would be wrong. Very wrong. The actual movable altar-table is set off to the Gospel side of the bandstand, as can be seen in a picture which now hangs in Wyneken Hall on CSL's campus - and which, alas, I cannot find online. But I could find their mission statement: 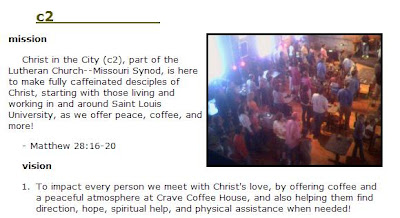 Don't worry, as the vision and values continue they found ways to get in all the Lutheran buzzwords.
"Fully caffeinated disciples" - get it? 'Cause it's a coffeehouse and a church.

The coffee shop/congregation advertises coffee during the weekdays, worship on Saturday at 5:30pm, and is closed on Sunday. I am not making that up. Seriously.

So....that's Crave/Christ in the City/C2. I think you can see why that might be a little controversial. But now it has the imprimatur of the Lutheran Witness, so nevermind.

And what review would be complete without a quotation from a someone who has experienced the place first hand?

"So, I don't usually get this way, but tonight's worship service was amazing. It really connected. It convicted me about a few things, the gospel was there and alive. The energy was good-- I don't know, John and Tony were perfect. Tony's class deserves a lot of credit. I was in the band, so I can't say this, but the music was top-notch. I've got afterglow from this one."