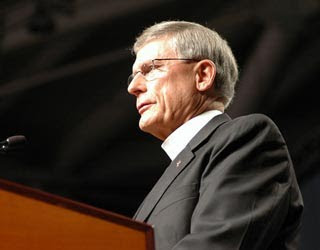 The president-emeritus of the LCMS, the Rev. Gerald Kieschnick, has written a blogpost expressing his "perspective" positing that the LCMS has a culture that is unfriendly to the laity.  However, the title he chose, "A Clergy Dominated Church?" makes use of the question mark, which seems to invite answers to his "question."

We respectfully disagree with his premise that the LCMS is a church body in which the laity are dominated, denied a voice in the governing of the church, and treated with disrespect by her pastors - especially in the "direction the LCMS seems to be heading these days."

This is a not-so-subtle reference to the fact that the current synod president defeated the Rev. Kieschnick three years ago, and in some ways broke ranks with the style and substance of the past administration.  It is no surprise that this is a source of disagreement for the Rev. Kieschnick, and may well be especially frustrating given the landslide victory - what secular pundits might consider a "mandate" - in the Rev. Matthew Harrison's recent reelection.  Of course, the Rev. Kieschnick's minority view should be heard and considered, and he is entitled to his dissent.

He writes: "Clergy dominance was particularly evident at last week’s Synod convention, even more so than in the past. In worship services, on the podium and at microphones, black shirts and white collars were abundant."

We think the Rev. Kieschnick's reference to collars is misleading.  There may well have been more pastors wearing clerical attire, as this does seem to be a trend among younger pastors, but there were not more pastors than in the past.  Delegates to the convention are half clergy and half laity.  That formula has not changed.  And in fact, the representation of every congregation by a lay person belies the claim that pastors "dominate" the representative process.

Moreover, it should strike no-one as odd to see a lot of clergy at a church convention.  One would expect to see a good number of lawyers at a bar association meeting, a large proportion of medical doctors at a gathering of the AMA, or a lot of really big tall men at a meeting of the NBA player's union.  This is not a conspiracy - it reflects the reality that in the LCMS, all pastors are members of synod.

He also mentions a dearth of laity in "positions of significant leadership in our church body. That includes, for example, university presidents, significant missionary supervisors, and other leadership positions at the national level."  Of course, the Rev. Kieschnick spent several terms as synod president, as well as previous service as a district president.  Neither of those positions is open to laypeople.  Were the bylaws changed with the new administration to restrict the roles of the laity?  The Council of Presidents is certainly the single most powerful body in the LCMS - and laymen and laywomen are not permitted to serve on this council.  Was the Rev. Kieschnick lobbying for lay membership in the COP when he was a member?

He writes: "Furthermore, there’s a discernible aloofness and even pharisaical demeanor exhibited by some pastors, obvious during worship services and in pastoral ministry functions as well. Intentionally or unintentionally, this telegraphs a 'holier than thou' attitude in both work and worship."

He provides no examples of this sinful and disgraceful attitude.  We do not believe such sweeping generalizations about pastors are particularly helpful.  The strong consensus of delegates and attendees who were at the convention is quite at odds with his description.  To the contrary, there seemed to be a great deal of concord and  harmony at this convention.  We disagree with his conclusion and would not describe our pastors to be "aloof."  To be sure, as with any other group of people, there is a bell curve of any and all human traits, good and bad.  The vast majority of parish pastors are not snobs.  They do not enjoy six figure salaries, big expense accounts, finely tailored suits, expensive cars, and palatial mansions to live in.  Indeed, most parish pastors are endowed with every manner of human sin and frailty.  They often live and work in rather humble circumstances, and relate to the average layperson in a much closer and less aloof manner than those who occupy lofty bureaucratic positions.  And we do believe this observation - which is admittedly anecdotal - is a very good argument for ordained presbyters in the LCMS who hold bureaucratic offices to serve a parish in some capacity, perhaps as an associate pastor, such as the example set by the Rev. Harrison.  We do believe it is very easy for men to lose touch with how ordinary people live when they are treated like princes of the church.  Continued service as a parish pastor is a humbling and grounding opportunity for service.

As to the conclusion that the LCMS is a "clergy dominated" church body, we should consider the following:
While we respect former president Kieschnick's right to his own perspective on the governance of our church body, we believe he could not be more wrong.

One of the issues that has come to fore of late (including at the recent convention) is the scandal of the many pastors who were removed from their congregations for unscriptural reasons and who languish on CRM status.  These men, in most cases, were removed by laypeople who oversee them on boards of elders, church councils, or voters assemblies.  In those cases of unscriptural removal from office, the "clergy dominated church" could be interpreted to mean that the clergy is being dominated.

The word "dominate" finds its roots in the Latin word Dominus - which is a title that is applied to our Lord Jesus Christ.  Rather than pit "missionals" against "confessionals"; or "conservatives" against "liberals"; or pastors against laypeople, we should find ways to reconcile, to dialogue, to find mutual respect among all of the Church's royal priesthood - which includes pastors and laypeople.  We should encourage the preachers of the Word, our shepherds, to be shepherds - not hirelings or fence-sitters.  And we should encourage our hearers of the word, our laity, to bring their gifts and talents to the table in areas where they provide valuable expertise lacking by our clergy.  We most definitely should not encourage laypeople to usurp offices to which they have not been called and ordained.

Instead of arguing over domination by clergy over the laity, or domination by the laity over the clergy, we should all humbly submit to our Dominus, the Lord of the Church, our Great High Priest, who has come to serve and to save.

Posted by Gottesdienst Editorial at 5:32 PM