The Reformation can rightly be viewed as a movement to recover what had been forgotten or obscured. We often focus on Justification and the meaning of the Mass - and rightly so, for the Lutheran Reformation did indeed polish up what had become tarnished treasures of the Church.

But we would be remiss if we did not also think of the Ministry when thinking of Reformation-restored treasures. To be more exact, the unitary and indivisible nature of the Ministry was strongly asserted in contradiction to Rome's claims that only those who were designated bishops by the papal see possessed all the rights of the Office of the Ministry given by Christ to his Apostles. Read all about it in the Treatise - or better yet, read a much more detailed defense in this classic work by AC Piepkorn from the Lutheran-Roman Catholic dialogue.

We confess this doctrine each time we have a parish pastor ordain a candidate. Yet we also view it as proper to retain, by human right, some division of the duties of the one office. Thus, by mutual agreement between all the presbyter-bishops and for good order in the Church, we agree not to use our authority to ordain without permission of the one presbyter-bishop we designate as District President.

Thus the Missouri Synod is a fellowship of congregation-sees and presbyter-bishops. The parish pastor, we confess, has all the rights of the One Office: he is a bishop. Yet, for the sake of good order, he is placed under the oversight of another holder of the One Office.

Which brings me, of course, to socks.

Apology XXIV.1 points out that we of the Augsburg Confession maintain the traditional vestments. This has implications for confessing our view of the Ministry in our liturgical dress. For example, many readers of Gottesdienst are aware that within the Western Rite, the priest wears his stole crossed beneath the chasuble while the bishop's stole is not crossed. Thus, a Lutheran presbyter-bishop may well wish to wear his stole uncrossed to confess the unitary nature of the Ministry. However, especially when celebrating a liturgy in the presence of the District President - the one to whom we have by human right given a certain amount of oversight over the other clergy - it would be appropriate to wear the stole crossed.

Socks...right. So also, traditionally the bishop's choir dress is composed of cassock and surplice - and violet socks (among a few other things).

So, before you you head out for the spring ordination season, make sure you pick up a pair. I'll try to get the R&D department at DK Brunner & Son Vestments going on it. Then, either wear them to confess your own episcopality or, more appropriately, lend them to chap who will actually be doing the ordaining. I know he'll appreciate it. 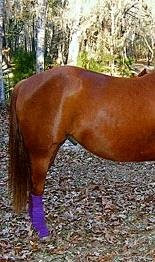 A depiction of a common medieval epithet for a less-than-faithful overseer.

PS: And one more thing, at the time of the Reformation (and until 1870, quite a bit after the Reformation) choir dress was the normal everyday wear of the bishop. So you may want to trade in your black socks for purple: what an opportunity to witness to your Roman Catholic neighbors!
Posted by Pr. H. R. at 9:47 AM