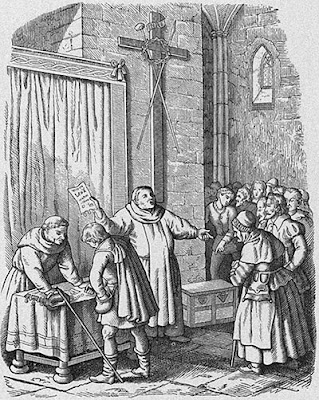 Gottesdienst Online is now, suddenly, merrily chugging along, as anyone familiar with this site can see. But trouble is lurking in the shadows. Read on, dear Gottesdienster.

In the meantime, if you haven't kept up, listen, you really ought to take some time. Five marvelous posts since the beginning of May, which is almost a post a day. Honestly, just grab a cup of coffee, and start reading: here, here, here, here, and here. And that leaves out the first posts, in late April, which are also top drawer, here and here.

Now then. Trouble in the shadows, I said. Yes, as it turns out, there is the mundane but necessary matter of funding for all this. We don't do telathons here; we aren't a TV series, after all. But in lieu of that, I have to say, we are in a spot. We just sent out the latest renewal notices, and when people renew that will help a little. But we're going to need more than that, I'm afraid to say, if we don't want to go the way of Chrysler. They, you will recall, are being bought out by Fiat. OK, how'd you like to see Gottesdienst get bought out by, say, Christian News?

I'm telling you, something needs to be done. The coffers are getting low, and I hate fund raising with a passion. But it's either that or Chapter Eleven. Heck, we can't even do Chapter Eleven, since we aren't incorporated. I think for us it'd be Chapter Eighty-Six (as in Hey, eighty-six on the cole slaw, heard emanating from the kitchen at your local greasy spoon, and nobody gets cole slaw for the rest of the day, 'cuz it's all gone).

So then, I'm going to hope and pray that there's some philanthropist among you readers who can help in a flash, with a simple couple of keystrokes. Or, perhaps you know a philanthropist that's only a cellphone call away, who can help us in the hour of need.

Just click here you'll see how easy it is to donate.

Perhaps, if we get an outpouring of love and hugs and a few bucks (rather, lots of 'em), I can report to you on the wild success of this appeal. And then we won't have to resort to selling indulgences, which would undo the Reformation, and plagues would cover the land, etc. etc.
Posted by Fr BFE at 8:30 AM