Not the Same Crowd!

Here's why I've been insisting the two crowds are not the same, but rather that what we are seeing is a clash of two groups.

First, it's hardly credible to see a large crowd, essentially children, rejoicing with hosannas on Sunday, and then within just a few days, derisiviely calling for crucifixion on Friday. That would mean they were hypnotized, or on cocaine, which is hardly possible. 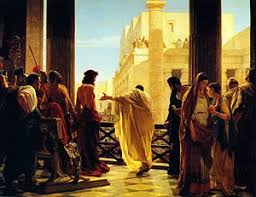 Second, if everyone suddenly wanted him crucified, then why would they have to arrest him by stealth, at night, and hold a monkey trial?

Third, again, if it's the same crowd, does this mean the weeping "daughters of Jerusalem" were only a few stragglers?

Fourth, the Gospels--especially St. Mark, it seems to me--show a rising tide of animosity of Jesus' enemies against him while at the same time showing great crowds seeking him.   This would naturally reach its pinnacle during Holy Week, and there's no reason to suppose that suddenly the second group morphed into the first.

Fifth, in the Lucan version, the the evangelist and even the Phariseees specifically call those crying hosanna Jesus' disciples.

Sixth, the Matthean version refers to the crowd as "children crying in the temple," and Jesus referring to this as a fulfillment of Psalm 8: "Out of the mouths of babes . . ."  So to have the two crowds be the same, one would have to say that the crowd crying for crucifixion was also essentially children.

You might think it a nice homiletical device to say we are so fickle that we are like this, crying hosanna one minute and rejecting Jesus the next.  But it's less than helpful, in my opinion.  People should not be called to repentance for calling out "crucify him" if that's not what they actually did.  Although we are responsible for his death in that without our sin, he would not have had to die; on the other hand, we, his people, are not among the "brood of vipers," allies of the serpent of old, who actively sought his destruction.  This distinction is important.

So in short, the answer is No, the Palm Sunday "hosanna" crowd and the Good Friday "crucifry" crowd are not the same one.
Posted by Fr BFE at 10:56 AM