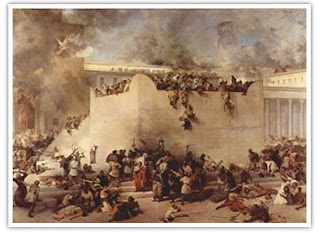 This Sunday's Gospel has Jesus weeping over Jerusalem and lamenting her coming destruction. What an odd Gospel for the middle of the summer, no? Wouldn't this be more in place either in Advent or in Holy Week?

The mystery is solved by a look at the calendar. The Tenth Sunday after Trinity in the historic lectionary usually falls in the first couple of weeks in August – and the armies of Vespasian and Titus entered Jerusalem on August 10, A+D 70.

I love this historical realism in the lectionary, and I lament the fact that the post-Vatican II 3-year lectionary disassociates this text from the anniversary of the fall of Jerusalem (in all three years, July-August are given over to a lectio continua of a given Gospel). I believe this was part of John XXIII's attempt at rapprochement with the Jews – he also did away with the traditional Good Friday collect which prays for “the perfidious Jews.”

It is also an excellent week to preach on the topic of taking God's grace for granted. The Jews cried Peace, Peace when their was no peace. They assumed that God was on their side, that they could do no wrong, that they would always have God's grace no matter what they did. Perhaps before writing this week's sermon, you should glance at SA III.3.42-45 and work that teaching into the sermon as well.