Nothing says: "We really don't believe this stuff" better than... 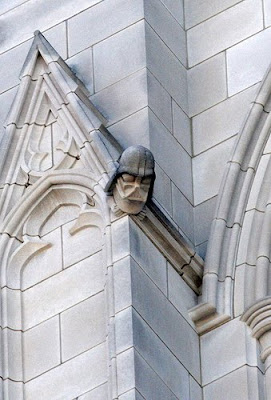 ...carving a gargoyle of "Darth Vader" on the side of your "cathedral."

If the ones who claim to be Christians don't take their sacred spaces and their faith seriously, why should anyone else? Is it any wonder our churches are emptying in the west?

Of course, the way the North American Lutherans communicate their own unbelief in the sacred and transcendent is to butcher the divine worship service of the church from the reverence of the historic sacramental liturgy and turn it into vapid entertainment with rock music, clowns, dancing girls, skits, and other nonsense. And I think such frivolity equally communicates unbelief as the "National Cathedral's" display above.

Can you just imagine the guard at the Tomb of the Unknown Soldier wearing a Darth Vader mask while he marches back and forth? Are we likely to find a Mosque being decorated with Obi Wan and Chewbacca among the minarets? How about the Holocaust Museum having "Use the Force, Luke" carved in Hebrew letters on a memorial plaque? You know, just for laughs.

Well, I know one fictional character who is laughing at us right now. C.S. Lewis called him "Screwtape." And his real counterpart is mocking us for making his job easier.
Posted by Rev. Larry Beane at 11:00 PM