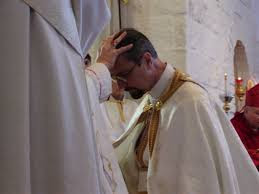 In the Roman Catholic world, character indelibilis is the special grace which attaches itself to the ordination of a priest which is irrevocable. This does not mean that an ordained priest cannot be removed from office for cause; what it does mean is that such a man can never again be considered a layman. From the Catechism of the Catholic Church:

"The sacrament of Holy Orders . . . confers an indelible spiritual character and cannot be repeated or conferred temporarily.

"It is true that someone validly ordained can, for grave reasons, be discharged from the obligations and functions linked to ordination, or can be forbidden to exercise them; but he cannot become a layman again in the strict sense, because the character imprinted by ordination is for ever. The vocation and mission received on the day of his ordination mark him permanently.

"Since it is ultimately Christ who acts and effects salvation through the ordained minister, the unworthiness of the latter does not prevent Christ from acting. St. Augustine states this forcefully:

"As for the proud minister, he is to be ranked with the devil. Christ's gift is not thereby profaned: what flows through him keeps its purity, and what passes through him remains dear and reaches the fertile earth. . . . The spiritual power of the sacrament is indeed comparable to light: those to be enlightened receive it in its purity, and if it should pass through defiled beings, it is not itself defiled." (Catechism of the Catholic Church, s.v. The Sacrament of Holy Orders, Par. 182-4)

The Lutheran (especially Luther's own) response to this was to point out that the ministry is a ministry of the word and Sacraments, which themselves confer grace for salvation, to be received through faith. Moreover the 'grace' of ordination cannot be allowed to obscure or supplant the grace of salvation. So Luther disagreed with the indelible character, at least as it was being bandied about in his day, and could say that a deposed priest was no priest at all(WA 6, 408, 22ff.; 567, 18-19).

Wolfhart Pannenberg has pointed out that if the idea is understood somewhat differently, we do not need to reject it altogether. If we see it "in terms of the thought of promise and sending that constantly govern the ordained and claim them for Christ's service, we no longer need to oppose [indelible character] on the Lutheran side, since this point of view finds expression in the Lutheran churches, too. Here there is no repetition of ordination." (Systematic Theology [Edinburgh: T&T Clark, 1998], 398.

I think Pannenberg's sentiments are right, although perhaps it isn't that we "no longer" need to oppose it, but simply that there is a proper way to understand it. After all, St. Paul tells Timothy not to neglect the gift that is in him by the laying on of hands (I Timothy 4:14), and the gifts and the call of God are irrevocable (Romans 11:29).

So, acknowledging Luther's concern that ordination cannot be allowed to supplant the grace of God given to an individual for salvation, we ought not be too quick to scuttle the permanence of ordination. Set aside for a moment the negatives (e.g. what about the rogue or wicked priest?), the positive truth is that someone who is ordained into service as a minister of the Gospel is indeed supposed to see himself as ordained for life. He may not view this calling as an ordinary job.

If you want to be, say, a schoolteacher or pharmacist, and after a number of years shrug and say you'd like to embark on a different career, that's entirely up to you. We cannot quite say the same for a clergyman. And in fact the shepherd who knows this will be less inclined to turn tail and run when he sees the wolf; especially if he remembers the attendant promises given to him for perseverance.

While it is true that there remain valid reasons for removing a man from the office, or even that the man himself might rightly see fit to step down, on the other hand there are many reasons that are not valid. Fear of persecution is not a valid reason.

Nor, for that matter, is the attainment of the age of 65. It is true that the 'retired' minister sometimes does plenty of preaching, and there is a place for retired preachers in the economy of the churches, so I do think that there's a salutary way to take 'retirement' in the church; but I don't think one can simply look at that magical age as an opportunity to go find a Florida beach and take in the rays for the rest of your life, just because you want to.

Seminarians ought to think twice before receiving their Holy Orders, because in a way it's rather like getting married. After all, you do take a vow to preach. And the Apostle says "woe unto me if I preach not the Gospel." Presumably his saying of this was not in any way related to his age.

So, then, is there a proper way to understand the indelible character? I think so.
Posted by Fr BFE at 8:23 AM