Of Stoles and Symbols

I recently attended a graveside service for a family member of a parishioner. It took place at a national cemetery and a US Army chaplain officiated. In my first call out of seminary I served under a man who was a National Guard chaplain and was always amazed at the faithful service and Word he brought to men under arms and in harm's way (he served in Balad for over a year). I gained a great appreciation for just how hard that job is and how much pressure there is in that occupation to buckle under (his stories about the higher ups "encouraging" the chaplains to keep prayers "ecumenical," and therefore devoid of Trinitarian formulae, are really something).

Even with that knowledge I was taken aback by the chaplain's vestments at this graveside service. Specifically: black stole with gold chi-rho on the right shoulder, gold cross on the left, and at the end of each side of the stole, the US Army eagle.

I understand that chaplains will appear in uniform - they are, after all, members of the armed forces. But shouldn't their clerical vestments - symbols not of government, but of godly service - be free of the symbols of the state's military apparatus? If I were a hospital chaplain, I don't think I'd want the SSM Corporate logo on my stole. 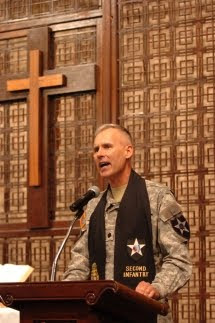 I Googled around a bit and found several iterations of this practice - especially specific units' symbols emblazoned on chaplain's stoles and tippets, as you can see above and below. I found one chaplain's blog that mentioned that the stole I saw at the graveside service was standard issue - a gift from the Army. I bet they give out stoles with stars of David and crescent moons instead of crosses, too - with the Army eagle on the bottom, of course. Do these state symbols on a symbol of clerical authority have a meaning? I think so. And I'm not very comfortable with the message they send.

What say those who have served or are serving as chaplains? Any talk amongst yourselves about this sort of thing? Have I misinterpreted this practice? 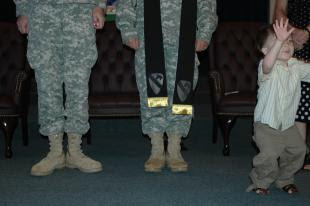 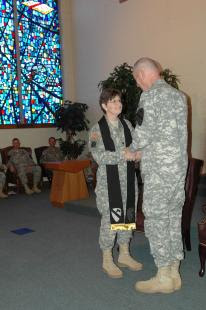