The Ritual of the Body 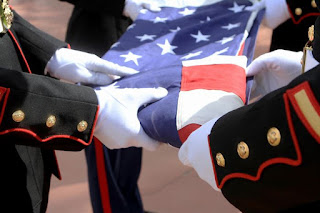 [Note: This essay was previously published in Gottesdienst, the print journal, in the Trinity 2014 issue.]

Although I had never met William Cox, whose funeral sermon appears in this issue, presiding over his funeral drove home important points concerning the blessings of traditional ritual and its general disregard by our modern American culture.

Earlier that week, the local funeral home asked if I would preside over a chapel funeral of a deceased octogenarian who called himself a Lutheran, but who currently had no church affiliation.  In the past, I have been reluctant to conduct such funerals - and even now, I would not conduct such a service in the sanctuary of the parish itself.  But as our culture drifts further and further away from Christianity, as biblical ignorance and indifference become more and more common, I am increasingly inclined to look upon such opportunities for not only proclaiming the Gospel of forgiveness, life, and salvation, but also as catechesis: to confess and teach what Christianity is all about, to explain who Jesus is, and to do so to a captive audience.  They may listen reluctantly, or perhaps not at all, but some may hear and have faith by hearing the Word of Christ (Rom. 10:17).

Such funerals are opportunities to plant seeds.

This funeral was not the typical funeral home service with impatient young people, either dressed like sex workers or attendees at a barbecue, chomping on gum and looking at facebook during the service, with the older people wiggling in the pews, huffing, and looking at their watches.  This service was far different.  This funeral was for an 86-year old distinguished U.S. marine, a veteran of World War II, Korea, and Vietnam.  His widow is an elderly and dignified Japanese lady.

His daughter is a middle-aged Japanese-American named Mika - not a name one often encounters in the United States.

By God's providence, just the day before, I watched an interesting movie (a rare treat for a busy parish pastor).  It is a Japanese film called "Departures", a magnificent story about a young cellist named Daigo who loses his orchestra job, and in desperation, takes a job advertised in the newspaper, working for a company called "Departures".  Based on the name, he thought the job had something to do with travel.  In fact, it was a mortuary job.

In the film, Daigo's wife's name was Mika.

The movie portrays the ritual used in Japanese funeral services - ritual that transcends religious tradition.  Daigo and his mentor are shown treating a Christian body with the same level of ceremony, dignity, and compassion as done in non-Christian rituals.  According to this film, in Japan, the body is washed, laid out, and dressed in front of the relatives, who kneel on tatami mats during the formal ceremony.  The body is treated not only with respect, but even affection and gentleness.  The deceased is modestly draped as the mortician carries out his work.  The body is finally dressed in finery, the face is made up beautifully, and the mortician takes his time to make everything perfect.  It is formal and carried out with diligent and deliberate slowness.

The onlookers kneel at attention, reflecting, mourning, and showing respect.  After the body has been unhurriedly prepared with precision so as to make the deceased as beautiful as possible, the family members come forward to pay their respects, stroking or even washing the face of the deceased.  Finally, the body is put gently into the casket, which is then closed.  In one scene, immediately after the closing, the casket was rolled into the crematorium and incinerated then and there, just after the long ritual had been completed.

Toward the end of the film, Daigo observes a different approach to treating a body - which was the body of his own father.  The morticians who rush into the room are wearing rubber gloves.  They are slovenly and casual.  They make it clear that their job is governed by clinical efficiency, without affection nor awe of what is happening, with no sensitivity to the family, and with no sense that the ceremony has any lasting significance.  Daigo dismisses the ceremonial hacks and proceeds to carry out the ritual himself - in a dignified and loving manner.

At Mr. Cox's funeral, the American marine's elderly Japanese widow lovingly stroked the face of her beloved deceased husband just prior to the closing of the casket, in a manner compatible with the movie that I had just watched.

But given that the Chief (the deceased was a Chief Warrant Officer, CWO-4) was a marine, his funerary ritual included additional military honors.  In that ceremony, I found a similar lesson as taught by the film "Departures."

First of all, the marines (honor guard and band) were courteous and respectful of the rites of the church.  We spoke before the service, and they agreed only to play Christian hymnody during the service.  Their instrumentation and arrangement was strictly traditional.  There were no guitars and drum kits.  They were not only deferential to the churchly rite, but cheerfully so.  There was no sense of pushiness or arrogance.  Of course, they were dressed not only in a ceremonially correct way, but in a formal way that looked sharp, precise, clean, and fitting for an important event.

Although the attendees of the funeral were largely unfamiliar with the rites and texts of the church, they were listening during the sermon and attentive during the readings.  It seems that they were used to ritual and its importance.  I did not see squirming and looking around, no arms folded, and no whipping out of smart phones.  There was propriety and polite attention.  Obviously, inside they may or may not have been paying attention, but the ceremony itself demanded attention, and precluded rude interruptions that have sadly become the norm in not only funerary rites, but in parish life as well.

Following the Lutheran funeral service, the marines conducted the ceremonies of taps, the firing of volleys (just outside the door of the chapel), and the folding of the flag and its presentation to the widow.  The ritualistic elements were carried out with precision, affection, and without hurrying.  The folding of the flag was a case in point.  This is a ritual that cannot be rushed.  Each step takes time and must be checked.  Even as the flag was being handed to the officer in charge, the marine folding the flag took a liberal amount of time to ensure the final folds and tucks were perfect.  The entire assembly - including the widow - waited patiently for this level of precision and propriety to be reached.

Of course, a military funeral is a special occasion.  Perhaps people were more patient because this was an unusual and profound event in their lives.  But think about what goes on every Sunday in the Divine Service, the Gottesdienst, of the parish.  The Mass is a funeral of sorts: a funeral of funerals, the death of death, in the presence of the Author of Life, who comes to us in the Church Militant.  It is the physical manifestation of our God and King.  It is of higher ritual importance than even the funerary rites of an honored member of the U.S. Marine Corps.  Why shouldn't our Divine Service be conducted with the same precision, affection, and unhurried way as military ceremony?  Why shouldn't our treatment of the body of Christ (both in the sacrament and in the assembled church) reflect the same loving dignity, adornment, modesty, reverence, and affection as Japanese morticians demonstrate in their treatment of the bodies under their care?

Why do some parishioners and pastors pine for rock and roll services, dancing girls, gimmicks, drama, cup-holders, casual attire, polka services, and other such things that would be shocking in the context of a Japanese ritual of the preparation of a corpse, and would certainly not be done at the funeral of a member of the U.S. Marine Corps?

I think the problem is faith.

The Augsburg Confession tells us that ceremonies are used in order to teach the faith (AC 24:3).  It seems that Christians are also in need of catechesis about just what is on their altars and on their lips, to confess and teach what Christianity is all about, to explain who Jesus is to a captive audience, who may listen reluctantly, but will listen nonetheless.  Such dignified celebrations of the liturgy are opportunities to plant seeds.

Although I never met Chief Cox in life, I am grateful that through him, the Lord provided me not only the opportunity to proclaim Christ crucified (1 Cor. 1:23) to a captive audience, I also rejoice that I was a captive audience, placed into this confluence of events by divine providence, so that I might reflect upon the blessings of the treasures of our traditional Divine Service and the reality that how we ritually conduct our services is also a rich confession of faith.
Posted by Rev. Larry Beane at 2:19 PM