Is Worship Trash or Treasure? 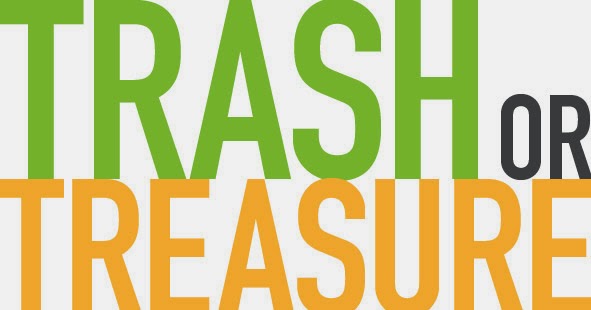 Here is a timely piece about a Lutheran church that is promising a 30-minute service by cutting out the ceremonies.

According to the article, this service "appeals to people who don’t want to sit in church all day on Sunday."


“The whole idea is to get people who are outside of the institutional church, who want something more relational, the opportunity to have that,” [Pastor] Boshoven said. “That it’s half an hour makes it less of a burden in terms of time commitment. The half-hour is fulfilling. It’s something meaningful that brings some joy.”

At the 30-minute service, there is one song  and an opening prayer. Then instead of a sermon, the pastor reads a story from the Bible and the group talks about it. They end with a prayer, careful not to go over the time limit.

“In my pocket, I keep my cell phone which vibrates and warns me it’s time to wrap it up,” Boshoven said.

This kind of thing is a capitulation to our facebook-twitter immediate-gratification drive-thru-window entertain-me-and-quick-or-I-will-be-bored culture.  Worship is seen as, at best, a duty, something to be endured.  It's funny how other things in modern life are seen in a radically different light, and if they go longer than usual, it is considered a blessing and a joy, a thing to be treasured: such as when the football game goes into overtime, the baseball game goes into extra innings, the band comes out for an additional encore, or the vacation gets extended by a few days.

But when it comes to the once-a-week Divine Service - in which your Lord comes to you in Word and Sacrament, forgiving your sins, sharing with you the good news, and giving to you everlasting life as a free and full gift - it is something to be dreaded and gotten over with as quickly as possible, like a root canal or a colonoscopy.  And if it goes on longer than usual, it is abominable, execrable, if not downright unthinkable: the source of grumbling and shifting in the pews and huffing-and-puffing - in the same category as extended rush hour traffic due to construction or waiting in an interminable line at the Department of Motor Vehicles.

And so pastors and congregations are now apparently willing to accommodate the culture by cutting and slashing worship so as to deliver their members, the very people for whom Christ died, from the "burden in terms of time commitment" (Oh horror!) and instead delivering unto them additional Sunday minutes to spend elsewhere, unsullied by signs-of-the-cross, bowing and praying and standing and kneeling, and singing canticles from the Bible and hymns from the service book.  Hooray!

One of the great blessings of a recent retreat that I attended was precisely the opposite of the above.  The contrast was stark and palpable.

Worship was not hurried, not rushed, not concerned about keeping everything as abbreviated and chip-chop as possible so that nobody would (God forbid!) miss a kickoff.  It was reverent and yet relaxed, focused on Christ and the Gospel, unconcerned with the TV schedule or getting little Johnny to his soccer match. We lingered in our Blessed Lord's presence.  We drank in His Holy Word without hustle or bustle, able to contemplate the One Thing Needful that truly matters in this mortal life.  The body and blood were not administered in such a way as to "get-em-in-and-get-em-out."  And in addition to our daily Masses, we gathered for extra time in worship through some of the traditional prayer hours (Matins, Sext, and Vespers).

That is how our Sundays in the parish ought to be.  Each Lord's Day should be a mini-retreat, a time of contemplation and of receiving the Lord's gifts with the eyes of faith and not with one eye on the wristwatch.  Dear people of God, don't exchange your priceless birthright for a bowl of here-today-gone-tomorrow pottage!

I pray that our congregations regain their countercultural commitment to share with their members the authentic delights and joys of casting aside the pleasures of this world - at least for an hour or two on the Lord's Day - and receive the gift of the Divine Service for what it is: treasure to be savored and not simply trash to be endured.
Posted by Rev. Larry Beane at 9:40 AM