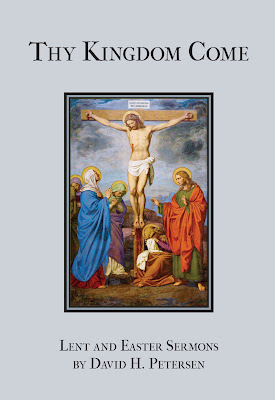 I suspect this is going to be the case between me and my new "old friend" Thy Kingdom Come: Lent and Easter Sermons by David H. Petersen (Emmanuel Press, Fort Wayne, Indiana, 2012, 215 pages, paperback, $20.00).

I just received the book today, and in fairness, I have not yet read the book in its entirety.  However, 67 sermons are included in only 211 pages (not including the Forward by Rev. Todd Wilken, the Introduction by Rev. Michael Frese, the Table of Contents, and the Scripture Index), and it won't take long to read the book in its entirety.  However, as is the case of devotional books, it is best not to rush reading it, but rather take one's time and savor it, ponder it, apply it, and allow God's Word to do its work through unhurried meditation and prayerful study.

So far, I have carefully read the Introduction, the Forward, and the Holy Week and Easter sermons.  I have skimmed through some of the other sermons.  I can honestly say that so far, with very high expectations of the book (based on my own experiences as a hearer of Pr. Petersen's proclamation), I have not only been delighted, but edified as a fellow pastor and preacher, and as a Christian sinner-saint in need of the Good News.  This book is so far exceeding my expectations!

As Pastor Todd Wilken says in his Foreward, "But whether you are a hearer or a preacher, I pray this book does for you what it has done for me.  For there is far more here than mere textual insights and sermon ideas; here is the Gospel for sinners.  This book delivers Christ crucified for sinners.  And we all need that" (page xi).

I heartily agree with Pastor Wilken, and would like to add a few thoughts of my own.

Like many men educated at Concordia Theological Seminary - Fort Wayne in the past few years, I was shaped as a preacher by many men, including Pastor Petersen.  Upon starting seminary, it doesn't take long for liturgically-minded seminarians to learn which congregations in the area are faithful to the liturgical and historical traditions of "Evangelical Catholic" Lutheranism.  Redeemer Lutheran Church is always one of the names at the top of that list - if not the apex.  Bright-eyed seminarians are typically wowed by Redeemer's architecture, reverence, the incense and bells, the magnificent vestments, the genuflecting and bowing and the unabashed sign of the cross, the High Mass (with celebrant, deacon, and subdeacon), the degree of reverence in the Divine Service, the polished acolyte corps, the musical dignity and beauty of Kantor Reuning and the choirs, the many conferences hosted by the congregation, as well as daily prayer offices and even daily Low Masses during the penitential seasons.  On those occasions when Pastor Petersen was the guest celebrant at Kramer Chapel at the seminary, "high church" seminarians would excitedly pack the pews to see and hear Pastor Petersen the celebrant.

But we students quickly learned something else: Pastor Petersen is also a preacher.  And how!

One found out pretty quickly about the law's ability to sting, to bludgeon, and yes to kill.  The entire sanctuary would be filled with silent men and woman staring at their shoes as Pastor Petersen condemned our Old Adams without allowing a loophole or even any wiggle room.  With his intonation of one word: "Repent!" he would have his hearers almost in tears.  And just when you think you could not take any more, you didn't have to, as Pastor Petersen proclaimed the cross, the forgiveness of sins, the sweet and refreshing Good News that Jesus, the Crucified One, is our Savior and our Redeemer.  If I could sum up David Petersen as preacher and as celebrant in one word, I would say: intense.

In his interactions with students, I found him to be truly "apt to teach," possessing a sense of humor and a candor that was formative to the many men who count it a privilege to have been formed - at least in part - by his work and ministry in Fort Wayne.  Obviously, men who served as field workers and/or vicars at Redeemer (I was not) have been the most influenced by him and credit him for making them the preachers they are today.

Thy Kingdom Come is a book that is not only wonderfully deep devotional material for any Christian, it is also a mini-homiletics course for pastors.  Just as I counted Pastor Petersen to be a great teacher to me before I was a pastor, I count him an even greater teacher now that I am considered to be his colleague - both in the ministerium of The Lutheran Church - Missouri Synod, and as a fellow editor at Gottesdienst.  Although I am the sermons editor, I continue to look to my brother-in-arms in the Lord's service as an instructor and mentor.

In no particular order, I would like to point out things that jump out at me from the book and from Pastor Petersen's preaching contained inside:

As I said, Pastor Petersen is a teacher.  Preaching is not primarily teaching, but teaching goes on in the process of proclaiming the Good News.  Pastor Petersen has a way of cutting to the chase quickly in explaining biblical symbolism, such as the meaning of the palm tree in Hebrew poetry as an insight into Palm Sunday (page 127).  He is able to succinctly explain literary devices (e.g. the kiss as relating to Mary of Bethany and to Judas, page 130) without pedantry or pomposity.  He gives historical explanations, again often in a sentence or two (such as his explanation of the Roman whip used on our Lord, page 132).  He preaches with an eye on the text's literary devices, such as tying the forbidden fruit hanging in the Garden to our Lord's body hanging at Golgotha (page 139) - imagery that is not only vivid and striking, but theologically connecting Eden to the cross, and further making the connection between the cross and the Lord's Supper (page 140).  He has the gift to speak with accessible profundity without falling into academic jargon.

Pastor Petersen also brings in etymology and translation issues from the original languages, at times preaching in poetic patterns and lushly picturesque turns of phrase, thereby searing biblical imagery into the mind.  He is never flippant in the pulpit, but there is at times what I would call a "reverent playfulness" in his preaching, sometimes quoting movies, novels, or even pop songs, not in a way that is fishing for entertainment, but in a genuine way that focuses on his point.  As we students were counselled by the late Rev. Prof. Kurt Marquart (who served at Redeemer with Pastor Petersen), our preaching must not become formulaic and predictable in its rhetorical style.  Pastor Petersen lives up to this advice, giving his sermons a freshness and certain unpredictability as to how he might treat any given text.

There is an eschatological element to many of these sermons, a constant reminder of the Big Cosmological Picture of Christ the Victor and our march through time toward the end of time, even unto eternity itself.  There is a constant reminder of the warfare between good and evil, of the fallenness and corruption of this world, and of the real meaning of Christ as the world's Redeemer who is setting creation anew and aright.

Pastor Petersen teaches how to properly borrow, modify, and include outside references - be they theological, historical, or homilectical.  The footnotes throughout the book freely attribute those places where Pastor Petersen has adapted ideas of other preachers and authors and applied them to his own hearers.  Pastor Petersen is not shy in using biblical turns of phrase, even though they may not be in the particular text assigned by the lectionary.  There are also times in Pastor Petersen's preaching where a big emotional uppercut is delivered in almost shocking language and metaphor.  Pastor Petersen is a wordsmith, and he applies the language necessary to get the job done - and he understands what that job is: to deliver Christ!

Just a few remarks on the book itself: it is paperback, reasonably priced, sports a simple and yet beautiful cover depicting our Lord's crucifixion.  Pastor Wilken's Forward is delightful and an accurate description of what you will find in this book.  The Introduction by the publisher Rev. Michael Frese (also serving as a pastor at Redeemer) has helpful explanations of not only the title and the relationship between preaching and God's kingdom, but also provides an explanation of how the book came to be and the background of how Pastor Petersen goes about crafting his sermons.

The book is tight and well-edited.  I have not encountered any typos or mistakes in formatting.  As a minor nit-pick, the book does not typically capitalize the divine pronouns as is normally done in modern English.  Given the ESV (the primary translation used in the book) does not capitalize these pronouns, there is bound to be a difficult editorial decision one way or the other - which Pastor Frese addresses in his Introduction (page xvi).  If I could have a wish-list, I would like to see a complete index in addition to the Scripture Index - but this would be a luxury and it would also inevitably add time and expense to the project.  The font and layout are easy on the eye, and there is ample margin space to jot notes.

I think Emmanuel Press has not only done a professional and high quality job as a publishing house, I believe Pastor Frese has given the Church a great gift in making Pastor Petersen's preaching available and accessible to everyone!  Thank you to Pastor Frese and of course to Pastor Petersen.

I am really looking forward to getting to know my new "old friend" even better!
Posted by Rev. Larry Beane at 11:54 PM