The Church has her own culture and language – even call it a style if you wish. It is a culture and language informed by the Word of God and blessed and handed down to us by generations of the faithful. That culture and language will find slightly different expression across time and place – but it will always be recognizable as the Church's own. Ceremonies and orders will differ across time and place – but they will always comport with the Church's culture and language. If it were possible, you could pick up King David and drop into St. Chrysostom's sanctuary in the fifth century AD and he would know what was going on. Likewise, you could take John the Golden-Mouthed and plop him into a Lutheran sanctuary during Divine Service and he would know what was going on.

That's pretty amazing when you think about it. There are plenty of differences in the earthly culture and language of David, Chrysostom, and Grandma Schickelgrüber. But despite their different earthly tongues, cultural expectations, incidental ceremonies, etc., their worship is all of a piece. Well, of course it is: the Church is the Church.

This is nothing other than our dear Fathers and Confessors said when they wrote,

Therefore, we believe, teach, and confess that the community of God in every time and place has the right, power, and authority to change, reduce, or expand such practices according to circumstances in an orderly and appropriate manner, without frivolity or offense, as seems most useful, beneficial, and best for good order, Christian discipline, evangelical decorum, and the building up of the church. (FC SD X.9)

The Church in every time and place will give expression to who she is as the Church. The Church is the Bride of Christ. She is not frivolous. She does not seek to give needless offense, for she is a kind Mother. She seeks for her children's benefit, discipline, decorum, and edification.

Those principles are at the foundation of the outlook of the “traditional” camp in the Worship Wars – otherwise summed up as the Reverent Worship Movement. The principles and outlook of those pushing for the radical, abrupt, and overt departure from the Church's culture and language – otherwise known as the Contemporary/Relevant/Emerging Worship Movement – are quite different. They would tend to stress only the first part of that quotation from the Formula: the Church in each time and place has the right to change ceremonies. The Church has a doctrine – not a culture or language – which must be brought to each earthly culture in relevant and meaningful ways. Furthermore, the second part of the Formula's quotation is too subjective to be worthy of comment. Who says what's frivolous or good for decorum? Surely the only judge must be the Church in each time and place: quidquid it, bonum est.

I am not persuaded that they are right. I think a person steeped in the the Scriptural description of the worship of Israel, the Book of Acts, and St. Paul's epistles can know what is frivolous and what is good for evangelical decorum. And there is that helpful mental experiment: if King David, or St. Peter, or Bl. Dr. Luther were transported into your worship service – what would he think? Would he know what's going on?

All that went through my mind again as I watched a video of the ELCA Youth Gathering's Divine Service – specifically the Sanctus – able to be seen by clicking here and then clicking on Part 7 once you arrive at the page. Go watch it. Go ahead.... 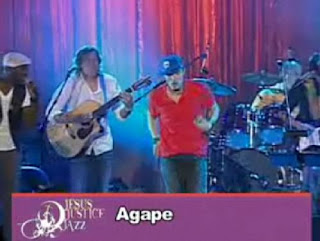 Friends, that was frivolous. David, St. Augustine, and Luther would have no idea what that Sanctus was. The actions of the folks jumping around did not match their words – at least if the Seraphim in Isaiah 6 know what they are doing. What they were doing was in no sense Scriptural – for just saying Scripture's words doesn't make it Scriptural, see Matt. 4 if you've forgotten that lesson. That “Sanctus” was not indicative of evangelical decorum – even the Gentiles tip their hats to the Dali Lama and reverently ask Bono for an autograph.

And I most certainly do not mean this as a kick to the ELCA when she's down. A similar example could easily be found at a score of LCMS parishes and district or Synod events. There are sincere believers in the tenants of the Contemporary/Relevant/Emerging Worship Movement in every Lutheran body. Just look at the Celebrant in that video. He obviously thinks this is good stuff – though it is equally obvious that he is not the “target audience” of this display. But he thinks it's what those other folks need, so he's going to go along with it.

And that, of course, is why the Contemporary folks think the Gottesdienst Crowd to be worse than a bunch of young fogey sourpusses. It's not just that we are square: we are narrow minded and tryannical, desirous to force all people to go along with our style when acquiescing to a different style would bring more people into the Church. No wonder they have an S.O.B. award.

But that is not so. What we are saying is something much more strident. We are accusing the Contemporary Worship Movement of being frivolous, divisive, destructive to evangelical decorum and good order, and offensive. And that is not a matter of style. It is a matter of being soaked in the language, practices, and culture of Scripture and then asking: “Does this ceremony, this order, this song, fit that? And among those that do fit, which is most beneficial to unity in the Church?” It is about looking around at the Church after 40 years of this Movement and asking, “Is the Church more united today than she was back before this started? How many parishes have been divided and relationships broken because of this Movement? Have our Lutheran churches become more or less Lutheran in their language, doctrine, and outlook after this movement?”

Those should be the questions the proponents of each side should be asking each other. We should be able to have a conversation about any given ceremony, order of worship, or song along the lines laid down for us in FC SD X.9.

So let's start with this Sanctus: does anyone want to provide an opposing view? For those who find this particular Sanctus offensive but who love their own congregation's praise band modeled on soft rock rather than rap, why? Does anyone think that this Sanctus promotes unity and harmony and evangelical decorum? Did the standard five piece, suburban, middle class, white folks praise band from your parish support those ideals when it started in your parish? Does it support them today?