The Synod, that is, not the State. Then again, they are a lot alike. Lots of neat stuff in Missouri - but then some real disappointments as well. The Arch is nice to look at, but the museum is that modern, History-Channelized, Big Government thingy. And don't even bother with Meramac Cavern: $17 a head just to get in! We kept driving - and then visited the free Illinois Caverns later on.

So also with vacationing in the Missouri Synod. It's a like a box of chocolates: you never know what creative worship resources you're going to get.

It's a sad thing, indeed, that something like the Evangelical-Lutheran Lutheran Congregation directory has to exist, but it sure does. The days are long gone when LCMS on the sign promised that you would be ushered into a reverent sanctuary where the Word of God would be proclaimed even if the pastor was a Bozo, thanks to the liturgy of the Church. (That sign never guaranteed that you would actually be able to receive the Lord's Supper on a given week - though that is one thing that has actually gotten better over the years, thanks be to God.)

There's a whole subspecies of Lutheran pastor, we'll call him Pastor EZ Gohing, who doesn't like the new-fangled Evangelical worship stuff: the praise band, the coffee shop church, the soul patch, etc. Just not his style. Couldn't do it if he did like it and smart enough to know it. He'll stick to the stuff in the hymnal, thank you very much -- with maybe a couple of services a year (Thanksgiving, Easter) thrown in from Creative Communications or some such, to make it special.

But in general, Sunday in and Sunday out, he's a user of the services of the Church, from Matins to the Order of Holy Communion, to Divine Service Setting 5, etc. In fact, he likes to explore the hymnal. You're apt to run into the Service of Prayer and Preaching on a non-communion Sunday in the "after Pentecost" season of the Church year (as I did on my last vacation Sunday out West).

For while Pastor EZ Gohing doesn't really like Pastor Prehsband's style, they share some deeper assumptions: personal creativity in "worship planning" is a must, there must be variety in the order of worship from week to week, and (most centrally) church should be "comfortable" and "welcoming."

What they mean by comfortable and welcoming is that the worship should not be reverent. They don't think what they are doing is irreverent - they would never put it that way. For them, irreverent means a positive, overt act - like blasphemy. They have no concept that irreverence could be unintentional: if there is no mens rea then there can be no irreverence, they think. And they certainly don't intend irreverence.

They intend comfortable and welcoming and friendly. And they think the way to encourage this is with chatty commentary on the liturgy as the service progresses, or by inviting the children up front (sitting in the chancel facing the congregation, of course) to share an object lesson ending with a sucker, or by starting the sermon with a wisecrack, etc., etc. 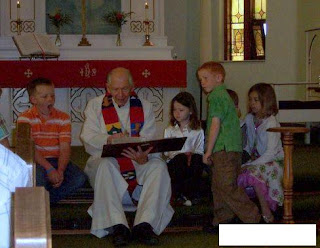 Pr. Gohing thrills the kids with the story of how God told Moses to "Take a load off: you're on holy ground."
I spent my first Sunday off this year with Pr. EZ Gohing. Nice guy. Sermon was a little rambling - but amidst all the jokes and personal stories, he did preach about Jesus. I am thankful for that. But I have to say: one misses the reverence (and one certainly misses the Mass. When asked why they didn't have the Lord's Supper, my 4 year old, remembering a previous trip to this parish, surmised that they gave it up because "they don't have a chalice.").

We fight not against flesh and blood - but against The Flesh: our own and our neighbor's. Reverence is a great help with this. A buddy of mine once suggested that we start to speak of The Reverent Worship Movement. It's a good idea. If we were taking submissions for a Mission Statment for Gottesdienst, I would vote for: "To encourage reverence."