Sabre of Boldness goes to Wildner: full story and other nominees

The 2016 Sabre of Boldness went to Rev. Charles Wildner, now of Abingdon, Maryland, formerly of Baltimore. Rev. Wildner was faithful pastor at St. Thomas in Baltimore for three decades, serving in an inner city parish whose members often had drug addiction problems. He was a Christ figure in the inner city, welcoming the homeless and aimless into his home. When he got married, he developed “Concordia House,” a place for these people to go, to recover, and to receive the Gospel. Recently, while he was away on business, he was, accused of sexual misconduct by a drug addict who didn’t like him. This outrageous and utterly baseless charge has resulted in his suspension from office after a brief investigation interviewing only a few antagonists who had no evidence.  Pastor Wildner served faithfully and tirelessly for well over three decades in the inner city, a veritable picture of Christ among some of the most forgotten people in the land: drug addicts, homeless, destitute people. The baseless charge of impropriety has led suddenly to Pastor Wildner's shameless suspension from office. The editors gladly attest to this man's character and Christian humility, being saddened by the political forces that unjustly took advantage of the situation. We are honored to have the opportunity to burnish his reputation with our own. 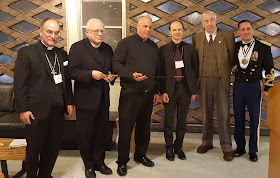 The nearby photo shows, from left to right: Rev. Dr. Burnell Eckardt, editor-in-chief of Gottesdienst; Rev. Charles McClean of Baltimore, who received the award on Rev. Wildner's behalf; Rev. Dr. Peter Scaer; Dr. Daniel Johansson from the Lutheran School of Theology in Gothenburg, Sweden; Dr. Chris Barnekov of Scandanavia House in Fort Wayne (both of these men representing the Scandanavian nominees), and Chaplain (Colonel) Jonathan Shaw, who is Gottesdienst's Sabre of Boldness editor.  There were seven other nominees, each of whom we also count worthy of honor for their dedication to duty and boldness in the face of evil. They were:

Rev. Michael Kearney, Pastor at St. Paul’s in Alden, Iowa. He has only served  for about a year and a half, but when he arrived, he immediately had to deal with some cohabitation problems in his parish. He dealt with them pastorally and clearly, stating that a cohabitating couple must not think they could simply rectify their impropriety by getting married, but by repenting of their sin. This led to some unsavory treatment of the young pastor, but, we have been advised, has also led to some God-pleasing repentance.

Rev. Annsi Simojoki of Finland. Rev. Dr. Anssi Simojoki, together with four other pastors, was defrocked by the Cathedral Chapter (the governing body) of the Archdiocese of Turku in the Evangelical Lutheran Church of Finland. His crime: participation in the life and work of the Evangelical Lutheran Mission Diocese of Finland. They are not seen in a favorable light by the Cathedral Chapter in Finland because they do not support the ordination of women, and they uphold the vows of their own ordination into the Pastoral Office.

Rev. Rogner Block of Sweden. Similarly to Rev Simojoki, Rev. Block was defrocked in Sweden because of his participation in the Evangelical Lutheran Mission Diocese, and also, similarly, because he could not support the ordination of women, a matter the State Churches could not tolerate. He and Rev. Simojoki have preached the Gospel, administered the Sacrament, heard confessions in congregations which had no pastors.
Rev. Dr. Peter Scaer of Fort Wayne, Indiana. Dr. Scaer has worked tirelessly in support of the unborn, both within and outside the church, lobbying politically for the upholding of their right to life, and preaching within the church on the need to do so. His efforts have been ceaseless for several years now, and he is recognized as one of our clearest voices on behalf of the unborn who have no voice of their own.

Rev. Brian Hamer, formerly of Flushing, New York. UPDATE (our original information was not entirely accurate): Rev. Hamer, a faithful pastor for over a decade in New York, was recently removed from serving as chaplain to his own congregation's school without cause, by district officials working behind his back and in collusion with congregational antagonists, as part of an ongoing effort to run him out of town. He never wavered in his commitment to his call, but last year he finally  took a call from the LCMS Board for International Mission to full-time military chaplaincy in the Navy.
Rev. President Terry Forke, Pastor of Trinity Lutheran Church in Harowtown, Montana, and President of the Montana District. President Forke was instrumental in finally bringing a resolution to the flagrant false teachings of Dr. Matthew Becker of Valparaiso. Dr. Becker, still unrepentant, has at last been removed from the LCMS.
Rev. Gottfried Martens of Berlin, Germany.  Rev. Martens has been pastor of St. Mary’s Lutheran Church in Berlin for many years, a church which has seen hundreds of refugees come in, Muslims seeking the truth and finding it under his preaching and catechesis, being baptized and brought into his congregation. His success among the immigrants has put his name in the German news, and so has put him personally at risk, due to the violence that so easily attaches itself to the Muslim extremists who do not take kindly to losing nearly a thousand converts to Christianity. Yet his efforts continue unabated.
Fr BFE at 9:21 PM